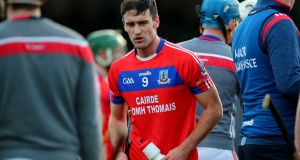 David Burke and his St Thomas’ team mates are hoping to win their third Galway hurling title in a row. Photograph: Inpho

St Thomas’ did just about enough to keep their hopes of a third Galway SHC title in succession alive after a thrilling victory over a Cappataggle side who lost their fourth semi-final in a row.

The champions were pushed all the way by a brave Cappataggle team bidding to reach their first ever decider. They almost forced extra-time too but Dan Nevin - who had earlier landed a superb sideline from the right - saw his cut from 25 metres on the left touchline in the sixth minute of injury-time fly narrowly wide.

The sides were level on four occasions in the opening half but Cappataggle deservedly led 0-9 to 1-4 at the break. They exchanged points three times in the opening 15 minutes before the decisive score of the game came when impressive full-back Fintan Burke delivered a superb pass to his cousin Eanna Burke and he soloed in from the wing and drilled the ball low into the bottom right corner to make it 1-3 to 0-3.

The response from Cappataggle was impressive and they hit the next six points without reply before 2017 All-Ireland winning Galway captain David Burke set up Oisin Flannery for a point before the interval.

The second-half developed into a thriller with Cappataggle refusing to relent after the champions got on top and Jarlath Mannion’s fourth point from play cut the gap to the minimum with seven minutes left.

Two points from Conor Cooney gave St Thomas’ a cushion but when goalkeeper James Skehill blasted a 20-metre free over the bar and substitute Steven Creaven landed another one from distance, it set up a frantic finish that ended in yet more heartbreak for Cappataggle.