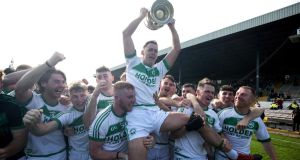 The use of substitutes by the respective management teams told a tale of how the Kilkenny SHC final unfolded at UPMC Nowlan Park.

A panicked Dicksboro had two of theirs in by half-time, three by the 33rd minute and four by the second water break as they found themselves drowning beneath a green-and-white tsunami and struggling for traction.

Ballyhale, meanwhile, only introduced their first sub in the 50th minute and promptly ran in four more shortly after, to allow them experience the final moments of a landslide county final win.

If there’d been more than 200 in the ground, we’d probably have heard the Ballyhale supporters cheering “olé” after each pass as the clock ticked down towards the inevitable.

Ballyhale were simply awesome as they secured a three-in-a-row of Kilkenny titles, their 18th in total, with the minimum of fuss.

They didn’t even require 2019 Young Hurler of the Year Adrian Mullen who wore number 25 but didn’t play after only recently returning to training following his cruciate lay-off.

They lost manager Henry Shefflin after January’s All-Ireland win too, replacing him with James O’Connor, who did a sound job of filling such giant boots.

A championship that started slowly and then simmered for a while suddenly came to the boil for Ballyhale who led 1-5 to 0-1 after 13 minutes, by eight points at half-time and wrapped it up well before full-time.

Brian Cody – not to be confused with the other Brian Cody who was an interested spectator in the stand – struck their first goal and Colin Fennelly the second, leaving Ballyhale 2-9 to 0-7 clear at the break.

A strong third quarter saw them stretch the gap, and Eoin Reid added two goals in a 90-second spell, the first coming in the 50th minute, to seal it.

TJ Reid turned in a middle-of-the-road performance, shooting 0-8 and two from play, but that was more than enough, with Eoin Cody sniping a fifth goal late on.

“Some of the training games we had over the last two weeks were unbelievable – they were like county finals so I knew the hunger was really there,” said Ballyhale manager O’Connor.