Sixmilebridge too good for neighbours in Clare hurling final 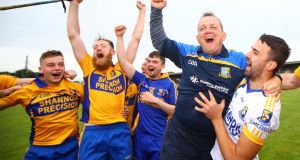 Capturing their 15th crown in all, the Tim Crowe-managed and Davy Fitzgerald-coached side produced a workmanlike performance to see off the challenge of their neighbours, who were appearing in their first final since 1993. On that occasion they also suffered defeat to the same opposition.

The first score of the afternoon fell to The Mills’ Gary Cooney who split the posts just 40 seconds from the throw in. Alex Morey replied for The Bridge from a free following a foul on his team mate Cathal Malone. O’Callaghan’s Mills free-taker Colin Crehan made it 0-2 to 0-1 inside the fifth minute before Sixmilebridge hit back with four in a row through Brian Corry, Malone, Alex Morey and Seadna Morey, to establish a grip on the game.

Having dismissed a fancied Ballyea in the semi-final, the Donach O’Donnell-managed east Clare outfit fancied their chances before throw-in. But in hindsight they will have to admit that they didn’t really bring their A game to Ennis. Sixmilebridge opened up a lead as the half progressed and had a substantial advantage, 0-13 to 0-7, at half-time.

The Mills did enjoy a purple patch early in the second period and slotted over the first three scores of the half. But they missed two scoreable frees early on, with Jacob Loughnane and Colin Crehan shooting wide.

The champions hit the next three and opened up a six point lead once more, by the 41st minute. With a solid defence, Sixmilebridge called on all their experience to carve out a deserved victory. O’Callaghan’s Mills for their part made too many unforced errors and squandered a number of scoring chances.