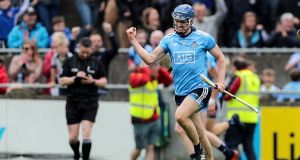 Every game should end like this. Dublin, who have seen a commanding lead turn to ashes in their mouths for the second week in a row, are awarded a 20-metre free in the 75th minute. Over it stands Seán Moran, straight-backed and ready, his team’s summer hanging by gossamer. In front of him are seven Wexford players lining the goal, with goalkeeper Mark Fanning crouching to the fore. Referee Fergal Horgan has two more whistles to blow – one to give Moran the nod to take the free, one to call time.

Peep. Moran’s shot is low and skittery, maybe not perfectly hit, maybe deliberately so. You’d have to give it the Zapruder treatment to know quite how it found its way to the in but as Davy Fitz said afterwards: “When you hit it off the ground, anything is liable to happen.”

And it does. It happens. The net dances, Parnell Park goes potty.

“Look, when it went down to the last puck of the game, we were delighted to get the draw,” said Mattie Kenny. “Seán Moran, we’ve seen him doing it for Cuala before on Paddy’s Day in Croke Park and he came up trumps again today.

“But I suppose the feeling of the players and the feeling of ourselves was, we were in a winning position halfway through the second half. Fanning made a really, really good save when Liam Rushe caught a really good ball and put in Paul Ryan. If that ball had gone in, it was game over at that stage.

Much and all as they are entitled to their disappointment, Dublin have no monopoly on grief here. This was a belter of a game, by a distance the most compelling of the summer so far in either province. Wexford were dead and then they weren’t. Dublin weren’t breathing and then they were. It was tense and tetchy and claustrophobic in the extreme, everything you want from a day out of your life.

The first half was gloriously bitty, a hotchpotch of tactical to-and-fro between two all-but identical teams. By half-time, both sides had 0-11 scored, had both pucked eight wides and had both given away six frees. Shaun Murphy was bombing out from defence in Wexford colours, helping himself to two points. Cian Boland was doing the same for Dublin, to similar effect. Neither side could get its full-forward line into the game.

It was only in the third quarter that the claw grip each had on the other started to loosen. Dublin came out from their tea in the better fettle and gradually started to put clear water between themselves and the visitors. Chris Crummey blazed into the game, landing a point from somewhere out near the airport and galloping through to force a close-in free soon after. Ryan popped it and scored one of his own from play in the next breath and all of a sudden, Dublin were 0-18 to 0-14 ahead.

Fanning’s double save from Ryan came on 51 minutes, first denying the Ballyboden man with a strong-handed dive and then blocking the follow-up. The play ended with Moran flashing a point as he fell backwards around midfield and when Thomas Connolly whipped his second score of the day soon after, it meant Dublin were 0-20 to 0-15 up with 16 minutes to play. If Wexford were going to find an escape route, the dig had to start soon.

They got a bit of help, it must be said. Dublin’s patient, methodical ball-movement from defence has been a hallmark of Kenny’s time in charge but it went awry on them here. A stray pass from Eoghan O’Donnell around the Dublin 45 found its way to Jack O’Connor and his pass put Liam Óg McGovern in the clear. The Wexford centre forward cut inside and knifed his finish and the gap was down to two.

From there to the end, it was harum-scarum stuff. Lee Chin, exemplary from frees all day, was everywhere now. Dublin goalie Alan Nolan had to rush out to smother an effort from Jack O’Connor. All the while, Wexford were tipping away at the scoreboard – a couple of Chin frees, another long-ranger from Murphy. And when Rory O’Connor popped up on the end of another turnover in the Dublin defence, his high finish put them 2-18 to 0-21 up.

That looked to be that. Wexford even managed the endgame pretty well, with Chin putting up the point of the day from the left sideline and Dublin having very little in reply other than raining Hail Mary ball down on Liam Rushe and hoping for the best. Until, that is, Moran found a way past Fanning with the last puck of the game.

“He knows himself,” Fitzgerald said of his goalkeeper afterwards. “He’ll be disappointed. It doesn’t matter who’s behind him, he was at the pitch of it and you want your best shot-stopper and he’s one of the best in the country without a shadow of a doubt. He’s actually bulling in there. He thinks he should have stopped it.”

He didn’t though and Dublin are alive. Just.