Sadness in Waterford, but they won’t stop believing 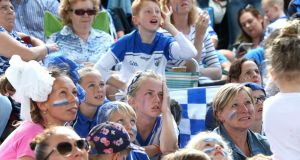 The Apple Market in Waterford city, where fans gathered to watch the match on a big screen. Photograph: Patrick Browne

Don’t Stop Believing is the supporters’ anthem and right until the final whistle they held on to that belief that the long wait stretching back to 1959 could end this year.

In the end, the plaintive screaming in the homes and streets of Waterford as their heroes pressed for an injury-time goal was followed by a rush of disappointment when the final whistle sounded to confirm Galway as champions.

In the newly covered Apple Market, where thousands had packed to watch the game on the big screens, a hush settled over the throngs as they realised that the dream of Liam MacCarthy was gone for another year.

There was applause for the effort mounted by the runners-up, cheers of “Waterford, Waterford” but a palpable sense of sadness at one that got away.

From lunchtime they had gathered to drink in the atmosphere, wearing the white and blue of their heroes, many with deckchairs and looks of hope.

Hope but no glory

“Waterford by five points,” Sarah Flynn from Waterford city declared ahead of the game. Her friend Hayley O’Neill wore a “I love me county” top, one of many items of clothing and flags to bear the John Mullane quote.

Young Taidhg Greene was also sporting that phrase, which was born after the 2004 Munster final, but struggled to remember who said it. But there was no struggling when asked about his favourite player: “Austin Gleeson.”

A rousing version of Ámhrán Na bhFiann was surpassed only by the roars when Kevin Moran scored Waterford’s first goal and Shane Bennett their second, and the crowds dared to dream in the second half as they nosed in front. Twice.

But Galway’s Joe Show was not for losing this year. “Galway were very strong, but we kept with them until the dying minutes,” disappointed fan Gary O’Mahony said afterwards. “But we’re proud of our performance. We’ll be back next year.”

In Waterford, they never stop believing.

1 UK Sport to investigate ‘deeply troubling’ allegations of abuse in gymnastics
2 Cam Newton broke the mould: Can his flame be rekindled at the Patriots?
3 Tipping Point: DeChambeau’s transformation raises questions, but who will ask them?
4 Pete Sampras: The forgotten great with the best serve in the business
5 Tuilagi case shows England’s home-based clause is out of date
Real news has value SUBSCRIBE

Women’s British Open to go ahead but without fans 17:16
UK Sport to investigate ‘deeply troubling’ allegations of abuse in gymnastics 18:04
Tuilagi case shows England’s home-based clause is out of date 16:48
Cam Newton broke the mould: Can his flame be rekindled at the Patriots? 12:12
Pete Sampras: The forgotten great with the best serve in the business 11:10
Crossword Get access to over 6,000 interactive crosswords