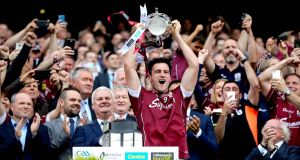 1 Colm Callanan: Erase that moment, he will wish, when misjudging Kieran Bennett’s rangy shot, allowing the ball to slip into the net, though he’ll feel he might have got closer to Kevin Moran’s goal too. Did everything else asked of him. Rating: 6

2 Adrian Tuohey: Held the fort and wrestled with Shane Bennett who retired early with injury. Tuohey was tidy and effective and reliable from then on. There at the death too as Waterford hunted for a late goal, calmly conceding nothing. Rating: 7

3 Daithí Burke: Powerful and steady and inspiring in equal measure, helping keep Jake Dillon scoreless and never found out of position. His ownership of full back this season is a central reason why Galway are champions. Rating: 9

4 John Hanbury: Got himself booked just before the break and kept his head and his nerve from then on, ensuring the Galway full back line held firm. No fear or doubt and again for another 24 year-old the essence of the Galway spirit. Rating: 7

5 Pádraic Mannion: Brought his serious skill and physicality to the position, even in the face of the continuous onslaught from Pauric Mahony. Last the pace and the distance, and the reason the Galway half back line won the day. Rating: 7

6 Gearóid McInerney: Massive game from one of Galway’s massive players, his switch to centre back this season another reason they are champions. His outrageously simple block on Austin Gleeson one of the standout moves of the game, and why Gleeson was never in it. Rating: 9

7 Aidan Harte: Found out of position in the fifth minute when Kevin Moran suddenly broke at goal, and finished into the net. Made plenty of amends at other times, showing both his experience and leadership, and versatility. Rating: 7

8 Johnny Coen: Set the tempo and the template with his brilliant point after just two minutes, running into space and holding his nerve to split the posts. His athleticism showed into the homestretch too, a central and serving midfielder in every sense. Rating: 8

9 David Burke (capt): An ultra marathon of an effort, covering every blade of grass, helping himself to four points in the process in one of the great midfield final displays. Replaced in the 69th minute only because by then his performance was complete. Deserved an encore of an applause. Rating: 9

10 Joseph Cooney: Now has that All-Ireland medal to show alongside his father’s, with a performance to boot, physical and smart in equal measure. His early point exemplified that by muscling his way into position and then making sure it counted. Added a second later on. Rating: 8

11 Joe Canning: From the throw-in he was centre stage, belting over his first shot on goal after 20 seconds, cool and composed thereafter. His point from a sideline settled Galway’s nerves after Waterford’s second goal, finishing with an immaculate 0-9. Take a bow. Rating: 9

12 Jonathan Glynn: Found his match in Barry Coughlan who kept him under high security, meaning that – high or low ball – he couldn’t find a way into the game. Possible lost a little patience too, before being replaced on 42 minutes by Niall Burke. No regrets. Rating: 6

13 Conor Whelan: Not easy for a 20 year-old to rise above Noel Connors, but he had his moments nonetheless, his point late in the first half a reward for his persistence. Brave and determined throughout, the future and present of Galway rolled into one. Rating: 7

14 Conor Cooney: Wow, his three points were a joy, and even if at times he drifted a little out of the game, was there at the death too, as Galway kicked for home. His fitness and physicality combined with his talent another reason Galway are champions. Rating: 8

15 Cathal Mannion: Also broke into the game early on with a ground-setting point and was in the thick of it from then on before being replaced by Jason Flynn on 55 minutes. A big game even for an experienced 22 year-old. Rating: 8

Substitutes: Both Niall Burke and Jason Flynn made quick and hugely telling impacts, both hitting two points each from play, and Flynn would have had a third had he not realised he’d more time to settle and shoot. Shane Moloney also came in for a fully extended David Burke. Rating: 9

Manager, Micheál Donoghue: May feel the gamble of starting Jonathon Glynn didn’t come off but everything else did, the way Galway started – and finished – ample evidence of a team brought to their peak performance when it matter most. Pressure released, expectation realised. Rating: 9

1 How do Klopp’s Liverpool measure up against greats of past?
2 Saracens to accept second 35-point deduction and effective relegation
3 Welcome to Iten in Kenya – home of champions and cheats
4 James Ryan returns to the Leinster fold for Benetton clash
5 Johann van Graan makes two changes for Munster’s last stand
Real news has value SUBSCRIBE