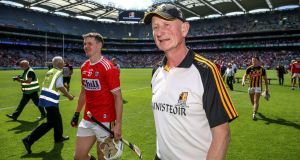 For Kilkenny manager Brian Cody, looking as pleased after a match as he had in a while, the performance and, importantly, the result of this All-Ireland quarter-final came down to a simple equation.

And that’s how it stands. Kilkenny, vulnerable after losing the provincial final to Wexford for the first time in 22 years, came out and administered the time-honoured lesson to flashy Cork teams.

The turning point after an evenly contested first half was the goal for Richie Hogan early after half-time, which triggered a decisive period of dominance, out-scoring their opponents 1-8 to 0-1.

“Obviously a very big score just after half-time,” said Cody. “To get a goal like that because the players as any players would, went out to lift things and lay down markers as Cork did as well and it was just a very, very good goal and it did spark a good period for ourselves.”

Cork counterpart John Meyler has had to come out explaining three times in six matches this championship and the fact that he won’t have to do so again was scant consolation after a match, which saw his rampant full forwards Patrick Horgan and Alan Cadogan provide 3-14 out of the 3-18 total and a second half when the effort fell apart.

“We just couldn’t get the ball past midfield, past their half-back line. Tim O’Mahony started putting quicker ball into the full-forward line and we got back into it with Cads and Hogie and it’s just disappointing.”

For Cody the focus turns to All-Ireland champions Limerick, who defeated them in an epic quarter-final 12 months ago.

“They’re everybody’s strong favourites to come out on top, not just the next day but with eventual honours. It’s a terrific challenge for us.”