Kerry and Kilkenny clicking into gear at right time 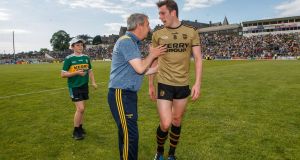 After a day of sport that would leave anyone cloth-eyed and cross-eared, it is the happy duty of The Irish Times to relay that Novak Djokovic is on top of Group One of the Super-8s after a nail-biting Super-Over victory over Cork in Ballybofey. Hang on, that might be a big muddled. Maybe Kerry won the Cricket World Cup after a fifth-set tie-break over Laois at Wimbledon. Around tea-time on Sunday, it felt like all doors were open.

Okay, let’s unpack it. Best to stay local. On a sweltering day in Killarney, Kerry gave Mayo an out-and-out hiding, running up a 1-22 to 0-15 scoreline and immediately leaping to the front of the chasing pack as second favourites for the All-Ireland. It wasn’t the barnburner that we had been anticipating but Kerry won’t mind. They did their bit.

They ransacked the Mayo kick-out and David Moran had his best day in a Kerry jersey in a couple of seasons. Jason Foley manacled Darren Coen for the day, David Clifford was his luminous self. It means Kerry still haven’t lost a championship game in Killarney since 1995, before most of them were born.

“We probably didn’t get overly hung up on the record in Killarney,” said Peter Keane afterwards. “because a day will come sometime soon, somebody will beat you in Killarney. We didn’t want it to be today. There was a great hunger by the players not to let it happen. The key there, not losing that first game is very important to the subsequent run of games.”

On that score, Kerry go on now to play Donegal in Croke Park next Sunday. Declan Bonner’s side will land in HQ in buoyant fettle themselves after a 2-19 to 1-13 win over Meath in Ballybofey.

They needed to knuckle down to their task in the closing quarter to get it done, with Meath having gone ahead in the 54th minute. But a fine display from Patrick McBrearty – who ended the day with 1-6 on the board – and a late goal from Oisín Gallen was enough to buy Donegal some breathing room down the stretch.

“I thought we showed real character to come back,” said Bonner of their closing 20 minutes. “I thought the lads coming off the bench had a major contribution. We felt that we had played reasonably well, maybe within ourselves. The conditions out there were very testing. I know it was the same for both teams but it was real cauldron there and as I say, the lads that came off the bench brought that energy with them.

“You’re not going to be dominating games for 70-plus minutes. Meath are a good side. They’re a Division One side. They were going to get their spell of domination. And we didn’t handle it that well, to be honest. But I thought the character the lads showed in finishing off that last quarter was a really, really good performance.”

In hurling, the line-up for the All-Ireland semi-finals has been established, with Kilkenny through to meet Limerick and Tipperary all set to face Wexford. Brian Cody’s side hauled themselves to the last four for the first time since 2016 with a 2-27 to 3-18 win over Cork in Croke Park.

Despite a hat-trick for Patrick Horgan, Kilkenny turned what had been a pretty level game at half-time into reasonably comfortable second-half beating. Richie Hogan and Walter Walsh arrived with the help TJ Reid has needed all year and Billy Ryan and Colin Fennelly were lively too. They are rounding into shape with Limerick on the horizon in a fortnight.

“We’re obviously delighted to win the match,” Cody said afterwards. “The prize for winning is not a trophy but it’s getting into the All-Ireland semi-final. Obviously that’s absolutely the focus and our intention all the time.

“We knew coming up that we were in for a fierce battle and it was a battle. But our lads I thought were really, really good. We got a nice lead and they pulled it back. They just refused to give in. They came back very, very strongly. But thanks be to God we lifted it again.”

In the other quarter-final, Tipperary ended Laois’s fairytale run with a sometimes stuttering 2-25 to 1-18 win. A couple of first-half goals from Jason Forde and Séamus Callanan didn’t burn Laois off and Eddie Brennan’s side went in at the break just four points down. But with Noel and John McGrath to the fore after the break, they gradually pulled away and head on now to face Wexford.