Tipperary end Laois hopes to set up semi-final with Wexford 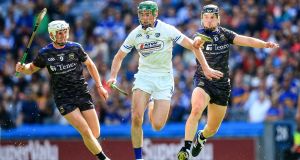 The Laois fairy tale may have had its final chapter written for 2019 but there was much to take from this All Ireland quarter-final defeat to Tipperary at Croke Park on Sunday to suggest it won’t be another 40 years until they get back to this stage again.

The final margin was well inside the handicap set by the bookies of 15 points and it never looked like being challenged, even after Laois were reduced to 14 men two minutes into the second half. Aaron Dunphy was dismissed for an off-the-ball incident with Tipperary’s Pádraic Maher.

It left Laois with a mountain to climb, trailing by five points at the time but they never looked like being overrun by a Tipperary side far from fluid. Nevertheless, Tipp head into an All Ireland semi-final with Wexford in two weeks’ time.

“It was a tricky fixture,” admitted Tipperary manager Liam Sheedy.

“A lot of people were saying all week that you just had to come up but that is always dangerous place to be. Eddie [Brennan] has that team playing really well. Laois have a great spirit about them. I witnessed it last Sunday myself in Portlaoise and we saw it again today . . . But for us we have managed to cross the line and get back into the last four. That was our ambition coming up here today.”

First-half goals from Jason Forde (penalty) and Séamus Callanan looked to have set Tipp on their way to a comfortable victory but Laois hung in gamely, just four points a drift at half-time with the help of a Ross King goal in the 34th minute to cut the arrears to 2-11 to 1-10 at the break. But the sending off of Dunphy two minutes after the restart ended any chance of another upset.

“I have been on the receiving end of those loads of times and I have never seen a lad getting sent off,” said Laois manager Eddie Brennan on the dismissal of his player who was their chief threat in attack from play with two points in the first half.

Bouyed by a vocal support, Laois started brightly with Mark Kavanagh opening the scoring with a second-minute free. Twice more Laois nudged in front with points from Aaron and Willie Dunphy and a second Kavanagh free to lead 0-4 to 0-2 after the eight minutes.

However, Tipp always looked threatening close to goal and moments after Jason Forde saw a goal chance flash just wide, he won a penalty and he converted with conviction to edge Tipp in front. Tipp’s second goal came on 16th minutes with a sublime pass from Noel McGrath to Séamus Callanan who finished to the net for his sixth championship goal of the summer.

Laois were beginning to be overrun with Ger Browne, Alan Flynn and Callanan adding goal scores while Enda Rowland was brave in denying John McGrath a goal in the 22nd minute. John Lennon also had to clear a Callanan shot off the line four minutes later.

However, Laois weathered the storm and ended the half on a high when Ross King broke through the challenge of Brendan Maher to fire to the net on 34 minutes as the Leinster men cut the deficit to 2-10 to 1-9 at half time.

Forde stretched the lead within seconds of the restart but Tipp failed to build on the numerical advantage.

Tipperary rarely threatened a goal after the break but there were good points from Noel McGrath, John McGrath, Ronan Maher, sub Barry Heffernan while Jason Forde top scored with 1-12.