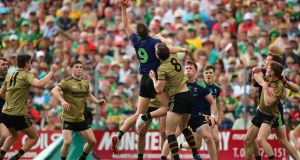 In Kerry, this was graduation day. Not just for the young team on display, but for Peter Keane too. Beating Cork in a Munster final doesn’t butter a lot of parsnips just yet, although Saturday night in Croke Park did put a slightly better sheen on it. But taking Mayo to town, laying a trap for them and snaring them in it, that’s worth a big salute.

Especially when the mood music around the build-up concerned the fact that Kerry had been schooled in the league final by an older, more grizzled, more physical Mayo. Keane knew every word of it and took no notice. His team did him proud and he was entitled to revel in the achievement.

“Well, look at the league final, March 31st, 3½ months ago,” he pointed out afterwards. “How many changes have we made since the league final? We had eight changes. That’s more than half a team. On top of that, a change that we hadn’t made was David Clifford who had only one game played before that in a period of six months. We had to give him that game to give time and get him rolling.

“I wasn’t overly concerned about the league final. If we had won it, it would have been great coming away with a cup, we wouldn’t have been jumping and shouting about it and we weren’t crying coming down the road either, there is a huge amount of learning required for those fellas. We got eight games out of the league and we were very happy with that.

“I would have always felt that we had a lot of injuries. David Moran I think he had two 10-minute cameos in the league. Our view was, and our medical team’s view was, ‘let’s get him right and get him ready for the championship. That’s what we have been trying to do with him.

For James Horan, picking over a systems failure is about as much fun as it sounds. This wasn’t one of those blaze-of-glory Mayo defeats. It was more of a cold and broken hallelujah and Horan had no desire to dress it up as anything more.

“Ah, we were comprehensively beaten,” he said. “Kerry were very good today, we were a little bit off and they ran out comfortable winners. But we have to move on straight away, there’s nothing we can do about it now.

“We struggled in the middle of the field. David Moran caught a lot of ball in the first half and the ball that we did get, we kicked away a huge percentage of it. Our kick passing was quite poor right throughout the game so when you’re not winning much ball in the middle of the field and anything you do get, you’re kicking it away, you’re going to struggle. We put ourselves and our full-back line under immense pressure, particularly in the first half.”