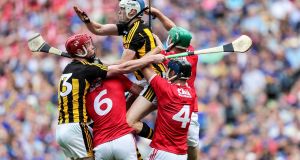 Kilkenny’s TJ Reid and Adrian Mullen vie for the ball with Mark Ellis and Stephen McDonnell of Cork during their All-Ireland SHC quarter-final clash at Croke Park. Photo: Laszlo Geczo/Inpho

Once again, regardless of changing fashions in tactics and hurling, Kilkenny and Cork came to Croke Park and the less fancied team won but it was no smash-and grab job on blind-sided favourites.

Kilkenny won deservedly, responding to the challenges of the All-Ireland quarter-final by seizing the initiative in the third quarter with an early goal from Richie Hogan the catalyst, surviving the response and sniping away in the concluding stages to prevent Cork from clawing a way back into contention.

The result copper-fastened Cork’s dismal championship record at Croke Park this decade, which has seen them win only one out of nine matches in the stadium – the 2013 semi-final against Dublin – and places pressure on manager John Meyler after three defeats this summer.

The consensus view beforehand had been that Cork’s forwards would be too hot to handle and that proved an accurate reading as far as Patrick Horgan and Alan Cadogan were concerned. Between them they rifled 3-14 of the team’s total but they had far too little support to turn that into a winning platform.

Reservations about the Cork defence proved equally justified and Kilkenny pillaged them in the third quarter by 1-8 to 0-1 to turn what had been an entertainingly back-and-forth encounter into a forlorn chase for John Meyler’s team.

Kilkenny showed none of the debilitating panic that had eaten away at their judgement in the Leinster final but this time they were running the contest from the front.

If ever collective resolve outbid individual excellence it was here. Horgan scored 3-10 – the goals from a third-minute penalty, bazooka-ed into the net, two, an instinctive, finisher’s score, swept into the net as he was being fouled in the square in the 28th minute and three, a catch over Huw Lawlor, a weaving run into position and a shot that threatened to ignite a Cork revival, which in the end never caught fire.

The strength of the Kilkenny collective could be seen in the team work that never flagged in the phases of the match when they were under pressure and with chief rainmaker TJ Reid tied up from play by Stephen McDonnell in one of Cork’s rare defensive triumphs, 11 of his team-mates chipped in with scores to supplement the captain’s none the less useful haul of 0-10 from frees with just one wide.

From the start, all of the assumptions about Cork’s forwards looked well-judged. Horgan was quick off the mark with a point within 10 seconds and then he added the penalty. With Cadogan looking likely to cause immense damage every time a long ball raked into his corner – he drew a characteristically fine save from Eoin Murphy in the fourth minute and Horgan couldn’t get hold of the rebound – Cork had hit the ground running.

Kilkenny responded in kind. Two of the players drafted in for the match, John Donnelly and Richie Hogan, got scores and Reid lasered over his first free. Then Adrian Mullen, quiet overall in the context of a great, rookie season, beat Mark Coleman and whipped a ball into Colin Fennelly in enough space to execute a goal: 1-3 to 1-1 and not 10 minutes gone.

Sufficiently rattled for Mark Ellis to hit a back-passed line-ball out of play, Cork came under pressure for the first time. They rallied admirably and began to click. A couple of Horgan frees, interspersed with points for Coleman, Harnedy and then Horgan again, from play re-took the lead and from then , the 21st minute until half-time, the teams were level four times.

Horgan’s second goal gave Cork the edge on the scoreboard and they led by two at the break, 2-10 to 1-11. The strength of the wind made this a vulnerable looking advantage but having played their way back into contention, John Meyler’s team can’t have been too unhappy.

Maybe a little more unhappiness might have been helpful because it was Kilkenny, who came out buzzing for the second half. A long ball right over the Cork defence left Fennelly in with a chance that appeared to take him by surprise but seconds later the next aerial assault saw the full forward tip the ball to Hogan who drove home the goal to make it 2-11 to 2-10.

The excellent Conor Fogarty went deep from wing back to crowd out Cadogan and Cork were unable to get any ball to stick in their attack. Their half forwards were brushed aside by the forward drive of Kilkenny.

Walter Walsh came on at half-time to enhance their attacking options and finished with three points including the one to stretch the lead to eight, 2-19 to 2-11, but an unanswered 1-4, Horgan’s goal and quicksilver points from Harnedy and Cadogan, revived the contest as replacement Tim O’Mahony began to hit quicker ball into his forwards.

Even that couldn’t swing the balance. With all the momentum behind them, Cork started to hit wides and Kilkenny steadied and helped themselves to points in the time remaining to maintain a comfortable lead with Billy Ryan and Bill Sheehan sharing three points and the scoreboard forcing Horgan into desperate attempts at goal from 20-metre frees, neither of which penetrated.

Kilkenny survive and head for a first semi-final in three years against their conquerors last year, All-Ireland champions Limerick.