No time for blaa-blaa as Waterford holds breath for final

Founded in 1939, MMI in Bluebell, Dublin makes medals, seals, military insignia and sporting awards. One of the items they create that they are most proud of are the GAA All-Ireland hurling and football championship medals. Video: Bryan O'Brien 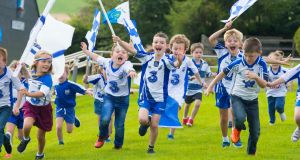 This week, from Lismore to Portlaw and Tallow to Tramore, big John Mullane’s (ever so slightly adapted) words are everywhere: “I Loves Me County.” Photograph: Patrick Browne

Waterford is fit to burst. Afraid to exhale. So this is what it’s like when an entire county holds its breath. The bunting is out across the city, but the place is far from blanketed in it.

A modest display of corrugated boards dusts the grass verges with messages of support, but nothing like the forest of placards we had envisaged for the approach roads and country junctions. Local papers tell us Waterford is in the grip of All-Ireland fever.

It will break, one way or the other, on Sunday. Until then, it keeps a constricting hand on Déise hearts broken too many times by a deep love of hurling. A delicious agony. Only 58 years’ waiting, they tell you.

Coming up on six decades. Sure that’s nothing short of criminal for a proud hurling county like Waterford, land of the ancient tribe of the Déise and home of the most cherished bread in Ireland – the blaa. Their last shot at All-Ireland success was in 2008.

Kilkenny, with demoralising inevitability, crushed them in the final.

Four years earlier, when the Déise lifted the Munster title and their beloved John Mullane was sent off in the process, the county gained an enduring motto along with the trophy and red card.

In the course of a frantic television interview out on the pitch in the fraught moments following Waterford’s win, a highly emotional Mullane declared “I love me county!” to the national audience and cemented his legendary status in Déise hurling lore.

This week, from Lismore to Portlaw and Tallow to Tramore, big John’s (ever so slightly adapted) words are everywhere: “I Loves Me County.” It’s written by young hands on copybook pages stuck to bedroom windows. It’s painted in blue and white on gable walls and it shouts its message from professionally printed flags and posters. “I Loves Me County, Boi”. In case anybody needs extra convincing.

There’s a small pop-up shop in the carpark of Woodpecker Floors and Tiles on the Dunmore Road. It’s one of a number around the county run by the supporters’ club to raise money for the players’ training fund. Stocks of bunting and flags are running low. There’s a wooden cut-out of a hurler on the wall of the workshop next to the store. He loves his county too, boi. Clara Mahony is trying to work inside, but she’s about as together as the box of loose mosaics beside the counter. “I can hardly talk, I’m so weak,” she confesses, moving bits of paper about. “Look, my hands are shaking, I don’t know what I’m doing, and there’s still a good few days to go to the match.”

Her mood is understandable as two of her sons, Pauric and Philip, are on the team to face Galway on Sunday. The family belong to the famous Ballygunner club and it’s been non-stop since the semi-final as the excitement continues to build. “People have been great, wishing us all the best. We’ve even had Cork people ringing and everything.”

How old are the lads? It’s hard to think straight, with so much happening, so much to worry about and so much to hope for. “Eh . . .” Clara reaches for the big-button calculator beside the invoice book and starts tapping. “Pauric is 25 and Philip is 26.”

“In fairness, she has five [children],” explains a sympathetic colleague. With less than a week to go, her tickets for the final “aren’t in yet” but Clara will be in Croke Park on the big day. “The actual ticket situation is crazy – they’re like gold dust around here.”

Judging by the signs in a lot of the businesses around the city, a large number of the Déise fans in Croker will have won their tickets in a draw. In Momo Restaurant on Patrick Street, the lunchtime rush has subsided and Kamila Bystrzonowska is preparing for the evening ahead.

Kamila is from Krakow in Poland and came to Ireland 14 years ago. She runs the award-winning restaurant with her husband Harry O’Neill, who is “completely and absolutely obsessed” with Waterford hurling. “He brought me to a match and made me wear a jersey. I like hurling but I’m finding it very fast. It’s all too fast, but the skill is wonderful.”

Her knowledge of the game and, more particularly, of Waterford’s pained All-Ireland history and frequently unhappy relationship with all-conquering Kilkenny teams, is very impressive. “Up the Déise!” she cries. “I have a friend from Poland and she thinks people are trying to say ‘Oops-a-daisy!’ so that’s what she says all the time.”

They’ll be closing the restaurant on Sunday – “People won’t be able to eat” – and her husband Harry is taking their son Lucas to watch Waterford in Croke Park. “He was born in 2008, the year we lost to Kilkenny. I remember it so well because I was pregnant at the time.”

“For me, coming from Poland, sport like this doesn’t exist. I’m still amazed to see everyone together from both sides. It is enough that you are proud of your county. You support your team and there is no aggression. There is slagging but everyone gets on. It is absolutely amazing. I don’t think anywhere would you get this real passion. It is beautiful to see.”

Lucas has three jerseys now and he got a hurley signed at a recent team training session. “You know, all the young boys are out on the street hurling. We have a young, focused team now and the thing is, they have the fitness. It was the other way around the last time, when Kilkenny were on the way up and our great players were getting older. We were so devastated in 2008.”

Denis Crosbie arrives into the restaurant. He is a member of the St James GAA club in Wexford, “only across on the ferry as the crow flies”, and is selling raffle tickets to raise funds for a new lawnmower and clubhouse facilities. Two pairs of All-Ireland tickets are the big draw. Kamila buys a book of three for a tenner (to add to the competitions she’s entered on Facebook. ) It’s a win-win situation – Denis can help his neighbouring county out with a few more tickets and Wexford GAA can benefit too.

Around the streets of Waterford, there is a sense of a city marking time. The midweek atmosphere is a little flat, the buzzy town centre exuding a rather low-key air of normality. Out around the byroads, there wasn’t a painted heifer or blue-rinsed hogget to be seen. It’s all about containment.

Like Clara, trying to keep a lid on things for her boys. Or like Kamila, worried in case people get too carried away only to face disappointment again. Settle down, lads. Settle down. But it’s hard. The houses around Belvedere Manor are all decked out in the blue-and-white bunting. A tree has been wrapped in blue-and-white tape. Forward Jake Dillon lives in the estate.

A placard hammered into the grass verge at the entrance proudly announces his presence. Further away, a blue-and-white painted van is parked on a driveway in Griffith Place. It’s an old Peugeot Boxer van, resplendent in blue-and-white chequer board, each white square signed by a team member or one of the past hurling greats. Is that a Dan Shanahan we see? Is that an authentic Mullane? Twenty-two-year-old Ger Power bought the van for €200 on Done Deal and brought it back on a trailer from Tipperary.

With the help of his uncle, he spent 25 hours painting it. When we mention the rather subdued atmosphere about the place, he understands. “People are hesitating. They’re a bit worried, after all that happened in the past. We’re biding our time.”

He thinks Waterford will win by two points. And then? “I don’t know what I’ll do. I’ll go mad altogether.”

The van isn’t the only thing sporting the Déise livery. Lucy, his Labrador Retriever, models the team jersey. It’s also signed by the team. An All-Ireland senior hurling title would mean the world. “I never saw one, me father never saw one. The only person who saw one was my grandfather, Nicky Flavin. He died last year at the age of 94.” Back in 2008, Ger’s uncle “did up a small car in the colours. I decided to go bigger this time.” Ger doesn’t have a ticket and will watch the game at home.

“And if Waterford win I’ll be carting that van around everywhere on the trailer.”

The omens look good, even if Galway are the favourites. The men from the City of the Tribes have never beaten the men from the tribe of the Déise at senior championship level. But they aren’t getting above themselves yet.

After so much hurt nobody is counting their Cappoquin chickens. But there is only so much of the old blaa and circuses routine a county can take: this time, they want Liam MacCarthy too. Then they will really and truly let themselves go.