Nicky English: Limerick ready to grasp their chance of immortality 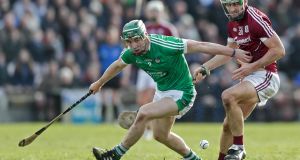 I’ve had a lot of to-ing and fro-ing on Galway’s form this year, starting in the league where they appeared flat and suffering from post-All-Ireland syndrome. It’s not all in the mind, either. There’s a lot of running around in a county after winning the All-Ireland and especially when it hasn’t been won in so long; visits to schools and other promotional rounds take their toll.

So they’ve been up and down but I’m certain of one thing: if they bring and sustain the form of that first 20 minutes against Kilkenny in Thurles, they are not beatable – by Limerick or anyone else.

The weight of evidence however is that they are unlikely to produce at that level. I think they’ll be better than against Clare in the semi-final but beyond that I’m not sure.

I was told during the week by someone with experience that for defending All-Ireland champions the actual final is a little easier than some of the other matches during the year. The finishing line is in sight and you’ve just to find one more performance to win again. The truth is that I don’t know, never having been in that position.

Galway are going to need that reassurance because, although you have to credit the resilience they’ve shown in what is the only unbeaten record left in the championship, they had reverted to being very reliant on Joe Canning to get them over the line against Clare.

Conor Whelan was playing a lot deeper and Johnny Glynn made a sporadic impact with his goal and a late assist. Joseph Cooney hasn’t been in great form in the forwards but switching him to wing back in the semi-final replay, where he played well, might refresh his game.

For the first time this year Galway showed signs of difficulty in the backs, John Hanbury under particular pressure from Shane O’Donnell. There are plenty of examples of players who have poor semi-finals bouncing back for the final but it’s not ideal situation in an area where they have been so strong.

Overall I believe they will improve without hitting the heights of the Leinster final replay.

Sustaining performance has been an issue and they didn’t deal well with Clare’s switch of Colm Galvin back to sweeper, which was to counteract the damage being done by Glynn. In the second match in Thurles, they found a better, more varied approach and can’t slip back into the habit of hitting predictable, long ball into him.

It’s an enticing prospect to throw Glynn in again onto smaller players but I think that they might be better advised to set a different challenge and deploy him at wing forward and use a Glynn, Canning, Joseph Cooney line to attack the Limerick half backs, which is the platform for so many of their attacks.

All through this year, Limerick have practised a good pattern of play, executed by good, mobile players. Their winning mentality has been obvious. In the league against Galway and Tipperary, they showed great resilience as well and although they lost to Tipp in the semi-final they recovered unbelievably well from the hammer blows of conceding sloppy goals.

Then against Cork, twice, and Kilkenny in the championship they had to pull matches out of the fire so that’s five examples of finding ways out of nearly impossible situations.

They have matured and continue to improve but how will they react to the pressure of a first All-Ireland final? From the outside John Kiely and his management appear to have done a good job in keeping the mania under wraps as much as possible in a county prone to overexcitement.

No-one appreciates this pressure better than I do because 1988 passed me by. My first All-Ireland final and I had these dreams of playing well and bringing the MacCarthy Cup back to Tipp for the first time in 16 years – they were all dashed.

It’s not easy to find your best form in a first All-Ireland and on Sunday the final will be the finishing line for Galway – they know what to expect and what they have to do – whereas it’s all a huge, novel experience for Limerick.

They had a significant win over Galway in the league but in both that match and the semi-final against Tipperary they were hitting up around 20 wides – shooting wildly from midfield and even farther out with half backs firing ball in. It’s been noticeable how improved they are on that front.

They must turn up on Sunday because whereas Galway might be able to win this without peaking, Limerick don’t have that luxury.

What they have though are big athletic players in their half-forward and half-back lines, capable of putting enormous pressure on Galway. In that middle third there’s no team better than Limerick in my view – plus they have a bench of proven game-changers.

They can sometimes be a bit too systematic in their approach and that doesn’t help them but when the bell goes for the final round and particularly when they’re chasing a game, like against Kilkenny and the Cork semi-final, they have the ability to mix structure with abandon and that’s when they’re at their best.

Calling this is next to impossible – in as exciting a championship as I can remember it hasn’t even been easy to identify winners during a match – but I have an image from last March of Limerick chasing the lead in Salthill.

In the closing moments, despite all of their wides and with Joe Canning by that stage on the field, they were swarming all over Galway and there was only one winner. It’s the nightmare scenario for Galway: Limerick with them going into the final furlong and releasing that energy.

I think Limerick will get the chances to win this and I think they are now ready to take them.