Super 8s: What are the final weekend permutations? 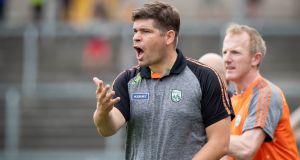 Kerry will be out of the championship if Monaghan and Galway are level after Saturday’s final Group One meeting in the inaugural Super 8s.

In the event of a draw in Salthill, it makes no difference what score Éamonn Fitzmaurice’s team tot up against Kildare in Killarney.

Fitzmaurice’s gifted young footballers, with minor medals jangling in their pockets, have already been seconds away from extinction in 2018.

It took a three-pronged masterstroke from James O’Donoghue, Kiernan Donaghy and the majestic David Clifford to avoid defeat to Monaghan on July 22nd.

Galway have qualified for the All-Ireland semi-final but to avoid Dublin they need victory – which would end Monaghan’s campaign – or a draw which would see both counties ease through at Kerry’s expense.

With one eye on the semi-final a week later, Galway manager Kevin Walsh could makes changes with Seán Armstrong and Adrian Varley coming into the team.

There is also the potential for some arithmetic should Kerry win and Monaghan lose. Monaghan’s scoring difference is currently +2 with Kerry -3 so a five- point swing would be required off the boots of Clifford, O’Donoghue (dropped for Donaghy against Monaghan) and the oddly scoreless Paul Geaney in Clones.

A Kerry defeat is almost incomprehensible as Kildare’s season is already cooked.

“You can’t fake intensity,” wrote former Kerry star Darragh Ó Sé this week, “you’re either intense about every ball and every passage of play or you aren’t. You’ll only fool yourself for so long.”

Monaghan captain Colin Walshe didn’t shy away from the fact they only have themselves to blame for not ruining this last round of the new football championship by failing to finish off Kerry.

“We led the whole game, we were probably in control of the match, we probably just didn’t take our chances, especially in the second half when Kerry pressed us real high and left space behind. We got turnovers, got down the field but didn’t get scores. Even the last attack we had we just weren’t clinical enough to take the point. Straight away after [the match] that was the feeling; it was one that got away.”

In those same post-match moments Monaghan’s best player Conor McManus (2-35 and counting this summer) reminded anyone who would listen that they still have control of their own destiny.

The psyche of the two teams is different simply because the stakes are higher for Monaghan whereas Galway cannot be knocked out. If both teams are level entering the final moments some keep ball will finish off Kerry with Galway facing the winners of Tyrone versus Donegal (a draw in Ballybofey Sunday would see Mickey Harte’s men through) and Monaghan booking a spot against Dublin.

“It’s different when you are in that position, when you are guaranteed a semi-final the next week regardless of who you are playing,” said Walshe. “At this stage of the competition, you are playing the top teams in the country. As far as we are concerned we don’t care. We want to be in an All Ireland semi-final.”

That want becomes reality in the event of a draw.

Another strange punishment due to the condensed football calendar sees the Pearse Stadium victors playing their semi-final eight days later.

“It’s probably something that could be looked at – maybe it’s teething issues of the Super 8s. Early on in the Ulster championship if you won you had a fortnight of a break and sometimes three weeks but this time of year you are wondering if you are trying to shoe-horn it in a short time frame.

“I suppose for ourselves we played five weeks in a row so we got accustomed to it so its just straight into recovery but that will be something to worry about Sunday morning if we get the right result.”

Sky Sports are broadcasting both matches, from Killarney and Salthill, live on separate channels.

*Terrace tickets (€25) are still available online for Sunday’s All-Ireland hurling semi-final replay between Clare and Galway at the 53,000 capacity Semple Stadium in Thurles.

1 A beautiful, happy accident - Moneyball is the best sports movie ever
2 Xavi says he is ready to return to Barcelona as boss
3 Ireland’s racing authorities prepared to be ‘creative’
4 Nicholas Quinn: ‘Swimming became how I dealt with grief’
5 Tokyo Olympics likely to start on July 23rd 2021, reports
Real news has value SUBSCRIBE