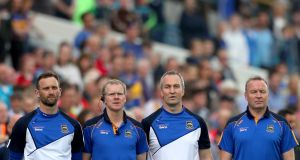 Mick Ryan’s Tipperary hurling management have stepped down. Following the 2016 All-Ireland champions’ inability to win a Munster championship match this summer – twice drawing and losing under the new format – Ryan, coach Declan Fanning and selectors John Madden and Conor Stakelum have moved on.

“On behalf of the Tipperary Senior Hurling Management team we wish to confirm that we are stepping down from our roles with immediate effect,” they stated via official Tipperary county board channels.

“Having carefully considered what is in the best interest of Tipperary hurling and our current crop of players we believe the time is now right for a change of direction at management level. It is our hope that a change in management will bring fresh new thinking to ensure Tipperary continues to compete for top honours in the coming years.

“We wish to sincerely thank the Tipperary County Board and its Officers for giving us the opportunity three years ago to take on the Management of the Senior Hurling Team,” the statement added. “We enjoyed some fantastic days and endured some equally disappointing defeats which are all part and parcel of sport at every level. It has been a great honour and privilege for each of us to have been entrusted with these roles.”

The statement went on to acknowledge the supporters club and player “passion and commitment” adding, “We wish we could have delivered more success particularly this year with the new hurling structures and fantastic hurling that has been played.”

However, these “extraordinary young men [the players]” are widely believed to have failed to attain full potential with the Liam MacCarthy Cup returning to Tipperary on two occasions (2010 and ‘16) despite six visits to the All-Ireland final since 2009.

Last year Tipperary lost to eventual champions Galway, thanks to a wonderful Joe Canning point, in the All-Ireland semi-final but this season Limerick beat them in the opening game, they drew the next two with Cork and Waterford before defeat to Clare brought an end to Ryan’s time with the panel that has spanned three separate managements teams.

Rory McIlroy admits Portrush nightmare was catalyst for his return to the top 21:00
FAI moves to defer portion of salaries as Fifa ponders cash support 20:30
NFL votes to expand postseason following cancelled annual meeting 20:21
‘For 25 minutes I ran out of oxygen’: Pepe Reina on his coronavirus battle 20:06
World Rugby aiming to outline range of options by end of April 19:03
Crossword Get access to over 6,000 interactive crosswords