Banner men buoyant after a thrilling return to Croke Park

‘It was great that the occasion wasn’t wasted on us’, says Clare's Shane O’Donnell 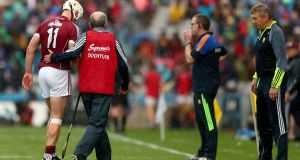 Down in the tunnel on Saturday night, everyone was Verbal Kint. You were nothing if you didn’t have a limp. Johnny Glynn hobbled by with enough ice strapped to his knee to pack a salmon and post it round the world. Everyone had a knock, everyone said they’ll be fine. But Galway must be worried about Joe Canning and Gearóid McInerney.

“I haven’t even been in to see them yet,” said Micheál Donoghue in his press conference. “Hopefully they’re just knocks and the boys will be okay to go again next week. But it’s just too early to say.”

Sixty yards down the corridor, the Clare players emerged from their dressing room eventually, tired but happy. On the injury front, they have no major issues ahead of the replay.

Pat O’Connor stopped for a word and, like most of his team-mates, his grin told you that all they were feeling now was a beautiful pain of an evening when they went to their limits and beyond.

“Yeah, there’s a lot of limping,” he said. “When your goalkeeper goes down with cramp it’s been a stressful evening! Sore bodies, lads were cramping, it’s just a sign of the conditioning of both teams. Just knowing our set-up and knowing what the lads have done with it, the conditioning side and the medical side, you couldn’t speak highly enough of them to drag the bodies through 90 minutes of an All-Ireland semi-final.”

Clare were definitely the happier campers afterwards. Maybe the Galway players knew more than they were prepared to let on about the state of play with their two totems Canning and McInerney but, one way or another, they were stony-faced when they came out. The whole Clare panel, by contrast, had an undeniable pep in their step.

“Yeah, it was great to get back to Croke Park, brilliant,” smiled Shane O’Donnell. “It was great that the occasion wasn’t wasted on us. We took a bit of time to get into the game but when we did, it was as thoroughly enjoyable to be part of it.

“You can feel it a small bit in the legs. It turns into a funny kind of game [when it goes to extra-time]. You start to enjoy it more, I find. Because it’s gone on for so long at that stage and you’ve been in it all the way, you’re really just enjoying being in it. If you’re playing well at that stage, you’ve a smile on your face running around the pitch.

“It’s brilliant. You really don’t worry about the score when it’s like that. we were two points down at half-time in extra-time but you’re enjoying it so much at that stage that you feel there’s nothing you can’t do.”

How it showed. O’Donnell ended the day with three points, the last of them a heroic solo effort in the second period of extra-time when nothing else would get it done. He wasn’t alone – as the stakes soared, so the displays all around the pitch rose accordingly. The best hurling on Saturday night was played when the knife-edge was sharpest. That’s how we got the game we did.

“An epic encounter,” was Donoghue’s verdict.

“We started well. Obviously we knew coming up that Clare were going to be a massive challenge and we got a good start and they came back well into the game and I think once they came back close to parity it just took a life of its own.

“Both teams probably had chances in normal time and similar in extra-time, but, look, I’m really proud of our lads, they worked really hard.”

Donal Moloney was quick to second that emotion when talking about his Clare players. Their first time back in Croke Park since 2013 and it was every bit as glorious at times.

“Our boys have taken a lot of criticism over the years, which we have always deemed very, very unfair. Even in Davy’s time they were taken huge criticism because they are the most professional group of men I have ever seen. It is a privilege to be associated with them.

“It was a magnificent game. The hurling public have been served many epic games this year and today followed suit.

“Even in the first quarter of an hour, Galway had terrific momentum and we knew they did that to Kilkenny in the Leinster final replay and we had planned for that and thought about it. Executing it is different and Galway were going full flow during that period. We never had any real doubt that we were going to bring this thing back though. We never had any doubt otherwise.”

1 Six Nations: Ireland are contenders but England still the team to beat
2 GAA officials and referees brace themselves as new rules kick in, and this time it's for real
3 Mike Catt hopes to have Irish backs purring in Six Nations
4 Limerick roar from behind to sink Tipp and start league in style
5 Owen Doyle: Creeping professionalism of schools rugby a threat to the game
Real news has value SUBSCRIBE