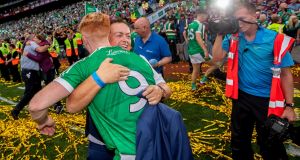 But Marty’s spoken rendition of the song was all part of his Limerick-themed tribute to the new All-Ireland champions when there were still a handful of minutes left on the clock. And if there is one county in Ireland that will never count its All-Ireland chickens until they’re fully grown adults it’s Limerick.

“The banks of the Shannon are overflowing,” he added, (which you hoped wasn’t the case because we’ve had enough bloody flooding for one year), and then he suggested there’d be no school this week where Limerick manager John Kiely teaches. In fairness he wasn’t alone he forgetting that this is still August so every school in Ireland is closed any way, most of us insistent that it must be September if it’s All-Ireland final day regardless of what the calendar actually tells us.

The main issue, though, with this salute to the new champions was they weren’t champions yet, the moment Marty declared them to be just that prompting a Galway comeback that threatened to leave Limerick hearts in pieces again, them only recently reassembled after Johnny Dooley and Co left them in smithereens back in 1994.

If that was The Five Minute Final this was threatening to become the Eight-ish Minute one, Galway narrowing Limerick’s eight point lead to just the one when the game went in to added time. For his earlier tempt-fating you sensed Marty would never again be allowed darken the door of the Treaty County should this one go belly-up.

And when Joe Canning hit that long free right at the death to try and snatch the equalising point you can only imagine it felt like 45 years to the average Limerick devotee before the sliotar fell short. And then you’d have half expected the final whistle to be greeted by silence, all those in green stretched in the stands, but instead, the roar was cacophonous. Limerick revived.

“Forget about Paris, Las Vegas or Ibiza, the place to be between now and Christmas is Limerick,” said Marty, and no better man to locate the best party.

After an exquisite Championship season, the final, as it proved, was more a dollop of icing under the cake than on top of it, not springing in to life until Marty began his lingering. But, as our panel pointed out, Limerick’s journey home with Liam MacCarthy after 45 years of hurt would hardly be marred by the memory of a game that failed to ignite until those closing stages.

“And Limerick being Limerick,” said Ger Loughnane, “they couldn’t have done it any other way. There were shades of ‘94 all over again . . . but they held out.”

That they did, John Kiely looking like a man who was grateful the schools are still on holidays because after those closing moments it’s a health farm he needs, not a classroom. “Absolutely horrendous,” he said of the finale. “We were always the bridesmaid,” he smiled. Now? Just Married.

As the Bard that is Cyril Farrell put it before the game, “some days you die, some days you fly, some days pass you by”. Limerick probably felt like they experienced it all in added time alone, from dying to flying and everything in between, but in the end they lingered on the Croke Park pitch alongside their new pal Liam MacCarthy and took it all in. You’d guess they wanted to stay there for another 45 years.