Casey doesn't play ball as Glynn gets no change from Limerick 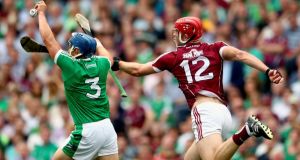 Mike Casey gets to the ball ahead of Galway's Johnny Glynn during Limerick's All-Ireland SHC final win in Croke Park. Photograph: James Crombie/Inpho

In the official match programme figures – and far be it from us to take such a document at anything other than its word – Mike Casey stands at six feet flat and weighs in at 11 stones and eight pounds. Johnny Glynn, the human cherry-picker around whom so much of Galway’s attack is focused, walks himself around in the world with five inches more in height than Casey and a pound short of four stones extra in weight. A good big ’un beats a good little ’un every time, right?

Not here. Not yesterday. It turned out that the mistake everyone made was in wondering how the Limerick full-back line – and Casey in particular – was going to stop Glynn destroying them in the air. The bigger question we should have been asking ourselves was what had Galway left once Glynn’s aerial threat had been neutralised.

Because neutralise it Limerick did. Casey was like a sleeveen politician all afternoon, refusing to accept the premise of the question that was asked and instead steering the conversation around to his own liking. He was never going to be able to catch a ball that both he and Glynn were going for so he very simply never tried. Instead, he just made sure Glynn couldn’t do it either. He learned the lesson of The Wire – you can not lose if you do not play.

Galway weren’t able to pepper the Limerick full-back line with as much Glynn-tailored ball as they would have liked. They were losing too many of the one-on-one battles out the pitch for that. But on the couple of occasions in either half that they did manage to deliver something workable in between them, Casey made it his business to make it none of their business.

He insinuated himself in and around Glynn’s personal space, planting his feet and daring the big Galway man to find a detour around him that would still give him a chance of grabbing the ball. Glynn never managed it. His successes all summer have come against full backs who have tried to bruise his spirit by taking a catch off him or getting their stick to the dropping ball ahead of him. Casey troubled himself with none of those fripperies. As long as Glynn had no ball, Limerick were in a good place.

“He was brilliant,” said John Kiely afterwards. “He was probably under the most pressure of all the players because of the amount of commentary that was on his match-up with Johnny Glynn. And you know, while there was a total mismatch height-wise, Mike used every ounce of strength in his body to attack the ball. He really had a fantastic match.”

Glynn got out to the first ball that came their way, a Pádraic Mannion sideline cut out under the Cusack Stand after seven minutes. Casey got his stick up and deflected it out for a 65, which Joe Canning duly scored. It had come indirectly from Glynn’s work but Casey had done his bit so you’d just about call it a score draw at that point.

But Casey soon began to take the game away for himself. On 11 minutes, the first high ball into the square. Necks craned in anticipation of the great Glynn paw reaching for the sky. No dice. Casey stood under him, hip to, er, thigh and subtly shifted the patch of grass over which they were fighting. The ball went to ground, Casey hoovered up the scraps and fed the ball back to Nickie Quaid in the Limerick goal. Ball cleared. Advantage Limerick.

On 18 minutes, a similar story. Canning put the ball in this time, Casey reacted with the same deliberate indifference. Picked his spot in the ground, physically disabused Glynn of the notion that he could pick his, got in among his airspace and clouded his thoughts and vision like a nerve gas. The ball sailed over the pair of them and Limerick were away again.

In their preparations over the past fortnight, Limerick would have been living for the point at which Glynn was forced out the field to get into the game. It happened 10 minutes short of half-time, by which stage Galway’s attack was malfunctioning all over the place. Limerick were 1-8 to 0-6 ahead and none of the Galway forwards had scored from play. Glynn promptly caught a puck-out over Dan Morrissey and sent David Burke through for a settler.

He was back on the edge of the square for the second half, though, and Casey was back in all of his life. When Limerick got the four of the first five points after the restart, Galway were in need of a goal. Burke tried another high one into Glynn, Casey spoiled it again. By the 43rd minute, he was out foraging on the wing once more, sending Canning away for a score after catching a puck-out. But that was all he could do.

There was simply nothing for him closer to goal. Glynn caught just one high ball on the edge of the square all day, long after Casey had limped off to a standing ovation in the 50th minute. The Limerick full-back had done his duty.

1 Business as usual for Ireland as October date looks likely for Italy game
2 Future Pro14 postponements to be recorded as 0-0
3 Not all hot dogs and dance cams: Hooliganism in US sport
4 Coronavirus threat ends Newcastle’s hand-shaking ritual
5 Decision day for the GAA in tight presidential race
Real news has value SUBSCRIBE