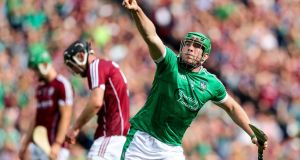 Just like that, Limerick, the forgotten county of hurling, the county seemingly locked in a time warp of regrets, has been revitalised after a summer that was less a contest than an aria to the sport itself.

Limerick are All-Ireland champions. They have waited since 1973, when Ireland joined the common market and the Osmonds were on the radio and Mick Mackey was still a living legend. What a wonderful and scary day of days.

After threatening to run riot against a tired-looking Galway team here, Limerick instead found themselves hauled back into a disorientating finale, when their nine-point lead was reduced to just one in the 78th minute, with the champions somehow seeking an unlikely equaliser with the last play of the game.

For too long, Limerick’s hurling story seemed to be a series of youthful brilliance squandered and petty infighting and heavy defeats. The serious business of hoovering up All-Irelands was taken care of by other counties.

What changed this year?

The details of how the shrewd and forensically organised guidance of John Kiely convinced Limerick’s young side they had the right stuff to take on all-comers may well emerge in greater detail over the winter. But it is clear that the schoolteacher demanded, in the dark months when he was building their internal machine, absolute discipline.

There were hints, as when Darragh O’Donovan, Limerick’s midfielder, recalled a punishing few weeks in St Francis’s boxing gym last autumn “literally bating the heads off each other. John has been saying it all year: we had to fight with ourselves before we fight with anyone else. We have to respect ourselves.”

In a strange way, their year of deliverance started and finished with Galway. Limerick raised eyebrows when they managed to haul themselves back from a 10-point half-time deficit to concoct a famous division 1B league win against the All-Ireland champions in Salthill. It felt like a small, good moment, but there was no real suggestion that afternoon that it would presage ultimate deliverance.

If Limerick were hungry that day, they were ravenous here. For a county with such complex All-Ireland final baggage, the 2018 vintage played as though liberated by the experience. They tore into the task and the gargantuan frames of the maroon team, setting the tone with ferocious tackling which verged on disrespect and a shoot-on-sight policy which resulted in 3-15 from play (just a solitary free) and 20 wides.

How, then, to explain that one of the poorest finals of recent years suddenly reinvented itself as one of the most thrilling?

“We told them: take on your shot,” said Kiely.

They took on everything, with Declan Hannon landing two killer points from centre back, Kyle Hayes striking two quick second-half points when Limerick were threatening to run riot, and both Tom Morrissey and Shane Dowling hurting Galway with goals coming from the kind of mistakes that the champions rarely made.

Slowly but surely that heavily fortified maroon defence was stretched to breaking point by Limerick’s live-wire corner forwards, Graeme Mulcahy and Aaron Gillane. Galway contributed to their own demise with a series of startling handling and passing errors which Limerick pounced on and nimbly converted to scores.

“When you see our lads with handling errors like that; you just don’t expect that,” admitted Galway selector Francis Forde.

For an hour, Galway looked every inch a team who had played eight games, including that gruelling semi-final replay series against Clare. Down 2-15 to 0-12 and drifting after 53 minutes, they were on the edge of a humiliating surrender of their crown.

For Limerick supporters, the experience must have felt like a trap. Winning an All-Ireland wasn’t supposed to involve a 70-minute procession. But the final seemed to have settled into a one-sided conclusion. After the deluge of breathtaking last-second winners and extra-times and replays which became the standard summer fare, neutrals might have felt let down by the occasion. Galway couldn’t fire: 11 first-half wides and five in the second, their full-forward line scoreless from play for the entire 70 minutes. Limerick were all but out of sight.

How could the vast Limerick support, and the thousands gathered in the Gaelic Grounds and watching across the world, suddenly find themselves on the threshold of a brand new nightmare?

To even draw this match, let alone lose it, would have been an unthinkable proposition. To not see the day out could have done incalculable damage. Mulcahy, smart and involved all afternoon, banished demons with his 77th-minute score. Galway rose again, with Joe Canning, who finished with 1-10 in a game which left him battered, having a late shot at redemption from a huge distance.

“In fairness to our boys, their sheer doggedness and resilience got us something and got something going towards the end,” said Forde.

“And we just ran out of time. But I think it would have been robbery if we had got something at the end to be honest because I think Limerick were by far the better team for the majority of the game.”

They were. It was as if hurling’s magnificent season lifted the county most in need. John Kiely’s low-key, unbreakable focus has helped a young team make their way through the clutter of disappointment and internal dramas. What a brilliant run. The schoolteacher shook his head when invited to think of the madness that awaits at home.

“In some strange way I would just love to go away somewhere nice and quiet,” – probably the only wish of his that won’t be granted.

“And not to have to face thousands of people, and the same tomorrow. It’s hard, like. There is a county, generations of people who have left that county who are so proud and so happy with what has been achieved here today, and we are delighted for them. But it isn’t easy being cast into the middle of all that. These lads have to be as good in their ability to be post-successful as they were in their quest to be successful, if that makes sense. They need to carry themselves well as All-Ireland champions.”

It felt like a plea: let’s not ruin this. Let’s leave the young athletes room to breathe and grow. Let’s see just how bright Limerick’s future can become.