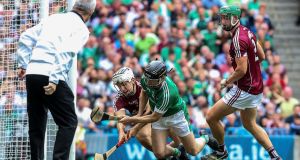 Forty-five years later the golden streamers fluttered down on Limerick to gild one of the most yearned-for triumphs in hurling history, but previously, in the dying seconds of this extraordinary All-Ireland final, history threatened to give way to mystery.

Having thrown themselves with all the exhilarating, if at times flawed exuberance of youth at the task of bridging the 45-year gap that separated the county from their last All-Ireland title and apparently having done enough to succeed, Limerick nearly found themselves instead at a crime scene.

Joe Canning, reawakened after a difficult first half to lead what looked an impossible recovery, stood over a free situated closer to the Galway 45 than 65. He had the shot to bring the final to a replay, and if the gardaí weren’t quite gathering to investigate possible larceny, they were surely sending out a squad car to take a look.

The free was on target but hadn’t quite the 100m distance and dropped, taking with it the champions’ last desperate chance of clinging on to their title. It’s unlikely Galway will be haunted by that failure, as the idea they would escape defeat looked outlandish for most of the match.

Limerick were too fast, too relentless and too irrepressible on the day. The final defied many of the expectations of experienced champions taking on eager newcomers. Galway had started their last three matches with blitzkrieg opening quarters but had been reeled back by Kilkenny and Clare, twice.

There would have been no reason for John Kiely’s team to panic had they found themselves facing a daunting deficit, but as events unfolded it was the champions who had to chase after the match.

It started fast and furiously. Both sides sprayed wides but Galway must have felt discomfort when Pádraic Mannion, hurling all summer as if in his own time-space continuum, was caught in possession and ran to ground.

A poor clearance and misjudged hand pass got Limerick off the mark through Aaron Gillane and Kyle Hayes before Graeme Mulcahy converted Gearóid Hegarty’s assist. But Galway went from being all at sea to still afloat and picked enough scores, largely through Canning’s dead-ball shooting, to hit the front when Joseph Cooney intercepted a Nickie Quaid puck-out to solo and score, putting the champions into a 0-6 to 0-5 lead.

Little did anyone know that the few seconds they held it would be the last time Limerick would trail all match.

In the 16th minute Séamus Flanagan, a force-field of energy all through, flattened Pádraic Mannion and centred the ball to Mulcahy, who jinked and shot. It was blocked but goalkeeper James Skehill, big enough to be occasionally uncomfortable with ground ball, got down too late and Mulcahy followed through to scramble the first goal.

Any inventory at this point showed Galway losing key battles. Jonathan Glynn wasn’t getting silver service inside but Mike Casey was coping intelligently with the towering Galway full forward, who was reduced to fouling in frustration at one stage.

Canning wasn’t having things his own way, shooting erratically and letting his frustration show as Declan Hannon, expected to struggle to restrict him, actually outscored his illustrious opponent from play in the first half.

At centrefield, David Burke and Johnny Coen had their hands full with Darragh O’Donovan and Cian Lynch, whose agility and work rate were again top class, and even on the puck-outs overall Galway came out second-best.

Gearóid McInerney had been passed fit after a calf injury but never moved with his customary fluency and would get turned over in possession for Limerick’s second goal by Tom Morrissey in the 54th minute.

If Limerick had been more clinical in their finishing, the match would have been irretrievable by half time. Instead they had amassed 11 wides and led by four, 1-10 to 0-9 – even that rescued to an extent by injury-time points by Gillane (a free) and Flanagan.

Galway attacked at the start of the second half but the conversion rates hadn’t improved – by half-time their own inaccuracies had nearly caught up with Limerick’s.

While they continued to misfire, Kyle Hayes stormed into the match. He had been effective in the first half but now found his scoring touch, rattling over 0-3 from play in four minutes to turn the screw on the champions, who were eight behind, 0-10 to 1-15, in the 44th minute, their troubles summed up by Joseph Cooney’s attempts to follow a cross-field ball from Conor Whelan, which he lost in flight and it bounced out of play.

Canning trimmed the deficit by two before Tom Morrisey’s goal appeared to end matters at 2-15 to 0-12. Four minutes later Lynch set up Flanagan and Skehill saved bravely, concussing himself in the process, but the cause still looked hopeless.

Canning maintained his pursuit like some Wild West tracker, sniping points here and there, but Limerick’s bench made its customary presence felt. The two Na Piarsaigh forwards Peter Casey and Shane Dowling combined for the third goal, which maintained critical distance.

Yet it was the ferocity of the Galway challenge, at the very time it looked at its most futile, that transformed the match at the end. It’s not like Limerick have never lost a good lead in a short space of time in an All-Ireland before, and eight ahead going into eight minutes of injury-time they contrived almost to ensure that 1994 would never be mentioned again.

The 2-2 concession, goals from Whelan and a steely-nerved 20m free by Canning, were alleviated by what turned out to be the critical point, Mulcahy weaving in to put two between the teams, at 3-16 to 2-17. It’s been a great year for the veteran of the side, whose leadership has steered them through volatile times but never to greater effect than on Sunday.