‘You don’t need any extra motivation, just try and get the body right and go again’ 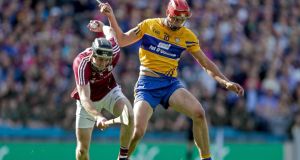 Galway’s Pádraig Mannion in action against Clare’s Peter Duggan. “I’m not sure is it because of last year. It’s just that the players have kind of matured.” Photograph: Laszlo Geczo/Inpho GAA

On the longest road to an All-Ireland final, Pádraig Mannion surely has the most mileage put in of anybody.

James Skehill and Daithí Burke have played every minute of every game in the 2018 championship and Mannion is next in line, his only time off the pitch a couple of minutes in injury-time at the end of the first Kilkenny game back in May. Needless to say, the Galway wing-back has covered more ground than the other two put together.

Yet there he was on Sunday after the game, striding down the tunnel in Thurles to meet the gentlemen of the press without the slightest hitch in his stride. Fresh as a breeze, no ice-pack, no limp, barely a scratch on him. Looking like the length of the journey has only added to him, not taken away.

“There’s a few bangs and bruises in the dressing room there,” he smiled. “But nothing major. It was tough going with a week of a gap and after playing extra-time as well. With the ground so hard, there’s lads with blisters and stuff like that. But look, everybody’s grand and looking forward to playing in the final.

“The good thing is that we had experienced the quick turnarounds in the round-robin so it’s just the same as that. You’re just trying to recover, trying to get ready again. You don’t need any extra motivation, just try and get the body right and go again.”

Getting back to an All-Ireland final has been a test of endurance for Galway as much as anything. Before the start of July, they’d had two replays in the previous decade of championship hurling; by the start of August, they’d doubled that total in a month.

The easy line says that they found a way back to the final because they finally got to lift Liam MacCarthy in 2017. Mannion reckons it’s a deeper thing than that.

“I’m not sure is it because of last year. It’s just that the players have kind of matured. Everyone knows that these games can come down to the last few minutes and you have to keep going, keep going. Clare in fairness last week, that’s what they did. They kept going, kept going when we got a few points ahead. Thankfully we were able to stay going today and pop over a few points near the end.

“They’re serious outfit. A team as good as Clare were never going to lie down. We had a good start to the game and it was a matter of keeping going then. You don’t purposely go out and say you’re going to play well in the first 10 minutes and not play well after that. We started well and just Clare are a serious, serious outfit. They were always going to come back.

“When you’re playing teams of that quality, they’re not going to lie down for a full 70 minutes. They’re always going to come back at you. If you have a good 20-minute spell, you can be guaranteed they’re going to come back strong. You just have to be ready and try and ride your luck while they’re having their purple patch and keep tipping away.

“We responded again and at half-time we felt we had played well. After half-time, conceding the goal, as a defender you feel it’s a killer. The lads up front responded seriously again and got a few scores at vital times. We’re delighted with the victory now.”

With Limerick waiting in a fortnight, it’s a final with no particular bones to pick on either side. The teams have only met 11 times in the history of the championship and only once in the lifetime of anyone who will be playing.

The last time they faced off was 2005 – Mannion was 12 at the time. They’ve danced a little in the league alright but it’s been early-season stuff. This will be a final with no context other than itself.

“We played them last year and they’ve improved,” Mannion said. “You could see last year the potential they had and they’ve come on so much in the space of a year. I’m sure they’ve improved since we played them in the league this year as well. Getting over Cork after extra-time shows how strong they are. We’re just delighted to be looking forward to that challenge and it’ll be a good two weeks ahead.”