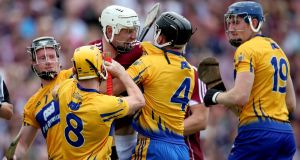 It mightn’t have ascended the giddy heights of the drawn encounter in Croke Park a week previously but Sunday’s All-Ireland hurling semi-final replay in Thurles stayed in the balance for virtually the entire 70 minutes.

As it was last week that statistic is unrepresentative of a match that Clare trailed from the second minute on and even though they produced the comeback that has become an almost inevitable feature of Galway matches, the last piece of the deficit was never reclaimed.

The challengers came with two sizzling goals within 11 minutes of each other in the second half and last week’s super-sub Aran Shanagher duly arrived off the bench again to snaffle a point with his first possession.

He had in the 67th minute what may have been the match-determining misfortune to see a prime goal-scoring opportunity denied, first by Galway keeper James Skehill and then when the rebound hopped up, by the post.

At that moment, Galway led by just one, 1-15 to 2-11. Little over a minute later, Joe Canning floated over a line ball to extend Galway’s lead to two and after John Conlon, not as prominent this time with Daithi Burke in combative mood, had hit his only point of the afternoon, another significant miss calmed the champions’ nerves.

Peter Duggan, not in the supernal form of the first match, took a free to equalise, failed to strike it properly and it was batted down to the intense relief of the Galway supporters, largely outnumbered in a crowd of 44,246.

Credit has to go to the champions, who in a third successive match watched an imposing early lead evaporate but remained sufficiently calm and alert to keep the scoreboard moving away from their opponents.

It’s as if they are tethered to the opposition, racing into substantial, early leads only for the rope to be yanked to jerk them back into a contest. Every time they threatened a match-winning break, Clare dutifully reined them back but couldn’t in the end fully retrieve the outcome.

Teams can only achieve so much in the space of a week between draw and replay and for Galway the main business was replacing injured All Star centre back Gearóid McInerney. Micheál Donoghue did so simply and effectively, bringing Joseph Cooney to wing back and Pádraic Mannion to the centre.

That meant Mannion was a free agent, as Tony Kelly had gone to centrefield, as Clare reprised the switch of Colm Galvin to sweeper. Whereas the gambit had the advantage of surprise in the first match, Galway were well tuned into it this time around.

Galvin’s placing as extra defender also meant that Galway had a numerical edge in the middle of the field and they went about their business efficiently, building a lead. Canning, Conor Whelan and David Burke helped themselves to points and at the other end, Daithi Burke raised the roof with a big catch from Conlon. Clare were in the same horror-space as a week previously.

Their touch was nervous and they spilled possession. Loose puck-outs gifted Galway free points and it took until the 21st minute to register a first point from play, their third overall when the one consistently menacing forward, Shane O’Donnell laid off a ball for Tony Kelly to score.

Within seconds however, Galway had found the net. Jonathan Glynn, again a source of terror under dropping ball but increasingly well marshalled by David McInerney, got to an aerial delivery, secure possession and swept the ball into the net for a familiar-looking, nine-point lead.

Just as familiar was the apparent lassitude that gripped Galway. Shooting was sloppy and clearances from defence were frequently unconsidered, flying to no one in particular but generally Clare defenders. Before half-time, Glynn again quarried out a goal chance but Conor Cooney couldn’t get his shot past Tuohy.

Despite having the whip hand, the champions failed to score for the remaining 17 minutes – an entire quarter of a match – but on this occasion they were lucky because despite the play settling into being essentially on Clare’s terms, the challengers’ shooting was dire – they finished the half with 11 wides.

Galway’s inability to bury their opponents was always going to leave the door ajar but it was still unexpected when Clare blew the hinges off in the third quarter. In the 43rd minute, O’Donnell auditioned for Dancing With the Stars when waltzing around four different partners before shooting the ball past a doubtless bedazzled Skehill.

Nine minutes later O’Donnell rerouted a Clare attack by coming out of the right corner and sending a ball into Duggan, coming through the middle and he shook off defenders and launched a shot from just under 20m for a second goal.

The net effect of these scores was to melt the lead. O’Donnell’s goal was part of an unanswered 1-2 and the margin fell to two points before Duggan reduced it to a point, 2-10 to 1-14.

This was in retrospect the moment of greatest danger to Galway. The goal was followed by wides from Canning and Niall Burke but in keeping with the pattern, Clare couldn’t score either and it was eventually Canning, who despite inaccuracies continued to take the fight to the opposition, pointed a free to get the ball rolling again.

It posed questions for both teams that Clare couldn’t close the gap and that Galway couldn’t meaningfully stretch it but the champions are back in the All-Ireland final for a second successive year – the first time that has happened in 30 years.

In a further blow for the rapidly rising reputation of Division 1B, both Galway and this year’s other All-Ireland finalists, Limerick, played this season in the second tier of the AHL.

1 Ken Early: Handball ‘crisis’ a timely distraction from the grim bigger picture
2 The Offload: Springbok heavyweights heading for Pro14
3 Positive omens for Stephen Kenny ahead of Ireland’s Slovakia clash
4 Why did it take the Seahawks years to trust Russell Wilson?
5 Tour de France: Every yellow jersey winner must feel guilty by some association
Real news has value SUBSCRIBE