Beggan and Monaghan turn their focus to final frontier 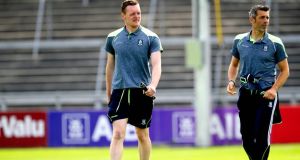 Rory Beggan at Pearse Stadium: “We’re going in for the win – we’re not just happy to be going into a semi-final.” Photograph: Ryan Byrne/Inpho

Rory Beggan was last man standing out on the Pearse Stadium turf.

Well, the last player as Monaghan’s goalkeeper was surrounded by a few thousand familiar and friendly faces.

“People were sort of saying ‘Monaghan are a quarter-final team, that’s their limit’. We wanted to put that right,” said Beggan, who only clipped the one 60 -metre free on Saturday evening to help secure safe passage to a first All-Ireland semi-final since 1988.

“We haven’t shown up in a couple of quarter-finals, but in the three quarter-finals we played in the Super 8s, we felt we played very well and deserved to be on five points, maybe six. We’re just delighted to be through, to have topped the group to give us that extra day to relax and focus on the opposition.”

Galway’s no-show at home, having already qualified, means it is old rivals Tyrone who stand in the way of a first All-Ireland final appearance since 1930. The drama that has tracked Malachy O’Rourke’s team since beating Tyrone in their opening Ulster championship tie refuses to dip.

They blew what seemed certain victories against Fermanagh and Kerry but the upward trajectory is continual, this latest performance their best of the season.

“We seriously turned up,” Beggan agreed. “We didn’t play so well in the Waterford and Leitrim games and we probably could get away with that, but here you’d be found out if you weren’t playing well and the lads really rose to the occasion. We really played well out there and it’s a testament to those lads out there because it’s full intensity for five weeks straight. It felt that we could keep going after the final whistle.”

David Clifford’s wonder goal in Clones is only just two weeks old but it’s far in the past for Monaghan and this football championship.

“That’s long gone out of the memory now. I tried to forget about that on the Monday after the game, but it kept popping up on the phone – I kept seeing it!

“Listen, we played Kerry off the park for 74 minutes and we got hit with a sucker-punch at the end for the second time this season. There’s amazing character in this group that we’re able to bounce back and get this result playing very well again. We’ll keep the momentum going in to next week and we’re going in for the win – we’re not just happy to be going into a semi-final.”

Conor McManus kept Beggan off most frees against Galway but a few mighty thumps will be needed if Sam Maguire is ever going to be captured.

“There’s no arguing with him! He’s kicked big ones for Monaghan over the years and he has first preference on them. If it’s outside his range, I’ll happily come up and take it, but Conor McManus wants to take a free and you’re going to let him take it!”

Still, Beggan trots towards the ball whenever a free is awarded inside his vast range.

“If Conor turns around and eventually says ‘you take the free’, I don’t want to be too far away in case they might throw up the free. I’m always there as an option if he doesn’t want to take it.”

On to Croke Park then (with Kieran Hughes the only fitness concern).

“It’s hard to put into words that we’re finally in a semi-final after a couple of years of hurt.”

Ryan McAnespie, who kicked a vital 0-4 in Salthill, does a decent job of describing what it has been like travelling through the qualifiers with the Farney faithful.

“We are a small county, you probably know half the people in the county, probably friends with them all. Just very proud now. It’s one big family.”