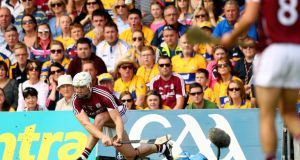 By the hair on their chinny-chin-chin – and no more – Galway have made the All-Ireland final. They led from pillar to post here, yet couldn’t shake Clare off no matter how much wriggling and wrangling they did. They probably had to double-check under the bus leaving Thurles afterwards to make sure they were free of them.

In truth, Galway were rarely anything less than the better team here. But when you combine some errant shooting with a dash of not-so-forgiving refereeing and a healthy shake of Clare character, you end up with a game that was still sizzling as the clock ticked into the 76th minute. Galway made it through but it was a lot less comfortable for them than it could have been.

Indeed, Clare could have stolen it. When Aron Shanagher was put through on goal by the terrific Shane O’Donnell in the 68th minute, Clare were only a point down. Shanagher’s first shot hopped up off the advancing James Skehill in the Galway goal, his second scooped effort found the right-hand post and hopped to safety. When Joe Canning split the posts with a sideline cut just seconds later, Galway had a cushion again to bring into injury-time with them.

For all that Clare showed immense guts to get themselves into position, they’ll know they didn’t play a lick here. Their problems were legion and oh so familiar from early on. It was as if they took the notion of a replay too literally.

They made the same handling errors as eight days ago, coughed up the same sort of scores at one end, ran into the same sort of traffic at the other. They played Colm Galvin at sweeper again but shorn of the element of surprise, Galway declined to make a hero out of him this time.

It seemed a particularly self-defeating call when it became clear that, as suspected, Gearóid McInerney wouldn’t be lining out at centre back for Galway. In the absence of the player who had finally sorted out Galway’s long-standing problems in that position, it felt odd that Clare would gift the champions a spare man in their half-back line by dropping Galvin to sweeper and Tony Kelly back to midfield.

In response, Galway just shuffled around their men and left Pádraig Mannion as the spare man. Mannion has been in Hurler of the Year form this summer when he has had a marking job to do – freed of such responsibilities, he had an armchair ride. Clare looked to have no particular plan other than high ball into John Conlon and O’Donnell – with a spare Galway defender always sniffing around, it was fruitless stuff.

It all washed out as pretty much the identical start to the game as last week. Galway tipped and tapped their way into a handsome lead, leaving Clare gasping for air from early on. Canning, David Burke and Conor Whelan all pierced the posts with bravura points as Clare tried to get their feet under them.

Daithí Burke made a huge catch at the other end in the 16th minute that got a bigger roar than any score. By then, Galway were 0-8 to 0-2 ahead and were brutalising Clare in every line of the pitch.

When Johnny Glynn tapped a long ball down to himself and swung one-handed soon after, Galway had the goal their dominance demanded. For the second week in a row, they had a nine-point lead. The question now was could they carry it to the shore with them this time.

For the rest of the first half at least, it seemed a reasonable bet that they would. Not because they were playing scintillating hurling or anything – Glynn’s goal was actually their last score of the half, 22 minutes in. But Clare were offering such feeble resistance that the distance back into the game just looked too far to bridge. They dug out three points before the break but it felt like token stuff.

O’Donnell had scored a point in the first half and set Tony Kelly up for another and was the one Clare player who was consistently a pebble in Galway’s shoe. On 43 minutes, he danced around four defenders and whipped home their first goal, a piece of balletic genius that kept Clare breathing. All of a sudden, the gap was only four, 1-11 to 1-7.

And when Peter Duggan blasted their second goal to the net 10 minutes later, the margin was down to two. O’Donnell was the provider this time, chasing down a lost ball on the endline and picking Duggan out with a torpedoed crossfield ball. Duggan, who had a shaky day on the placed balls, shot like he wouldn’t be denied.

So Clare were back in it and from there to the end, they remained within touching distance. Galway could only hold them at bay with frees from Canning and that wondrous sideline. But the champions were pucking endless wides as well, leaving Clare in with a sniff coming down the stretch.

Had that Shanagher chance gone in, they might even have snuck off into the night with the loot. As it was, a late Niall Burke point off a Glynn catch sealed the deal.

Galway in the final, Limerick at the ready.

1 David Clifford sends everyone back to their corners unbeaten
2 Six Nations: A 21st-century tournament that saw Irish rugby come of age
3 Six Nations: Ireland are contenders but England still the team to beat
4 Sublime 67 leaves Rory McIlroy right in the mix at Torrey Pines
5 Owen Doyle: Creeping professionalism of schools rugby a threat to the game
Real news has value SUBSCRIBE