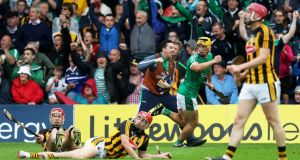 That’s the way to make history. Limerick came to Thurles on Sunday afternoon seeking a first championship win over Kilkenny in 45 years and not only achieved it but did so in the most demanding circumstances, having to fight back from a typically late, late Kilkenny goal that threatened to undo what had been a terrific display.

They will face Munster champions Cork in the All-Ireland semi-finals at the end of the month.

So, Kilkenny’s trails ended at the All-Ireland quarter-final stage and for the first time under Brian Cody they will go three years without the title, but their presence in this year’s championship can be traced through some of the most breathtaking contests of the summer.

Afterwards Cody was graciously emphatic that his team’s run of three successive weekends in action had not been a factor but it was one of the issues stacked against them.

The fact that Kilkenny conjured up another elemental effort will have made Limerick’s jubilation all the greater. John Kiely’s team came into this in the dangerous state of ‘being fancied’ to beat opponents who by their nature are as hard to put down as a ball in a pond. More urgently it was felt that the whole progression of the team would be undermined if they couldn’t do it.

They absorbed this pressure and largely ran the race from the front once they had caught up after a nervous start. And after they had hit the front with nearly half an hour gone they weren’t caught again - until what appeared to be the inevitably fatal intervention by Kilkenny in the 65th minute.

At that stage Limerick led by 0-22 to 0-21 - John Donnelly having been green-lighted for a point by Hawk-Eye a minute previously. Donnelly then launched a rampaging run through the middle of the defence and laid it off to Richie Hogan. In what must have been slow-motion horror for the green-and-white supporters, he turned and buried the ball beyond Nickie Quaid.

This had been the pattern of the match: we watched Limerick inching ahead, getting reined in and going again, all the while waiting for the Kilkenny force de frappe to knock them irretrievably off balance.

Their response was phenomenal. Within a minute, Tom Morrissey, who had an immense match on the wing, and replacement Peter Casey had levelled the score and a minute later, another bench introduction Shane Dowling had put them ahead.

Limerick had hauled themselves into a three-point lead by the break, 0-15 to 0-12, and kept going after the break, at one point moving five ahead, 0-18 to 0-13 by the 47th minute but their opponents would never go away and to no-one’s surprise the teams went down the final straight neck-and-neck.

Kilkenny will reflect on some poor shooting, reflected in 16 wides, but the Limerick defence played its part with constant pressure. Declan Hannon had his difficulties on Hogan at the start but played a creative role in a couple of scores and although looking injured in the second half, finished well.

Seán Finn did a fine job on Reid until the latter was moved and wing backs Diarmuid Byrnes and especially Dan Morrissey won crucial possessions when the match was on a knife edge.

Limerick’s Na Piarsaigh cavalry played a significant role. Casey and Dowling shared three points and Will O’Donoghue buckled into the contest at centrefield for the final 10 minutes.

In fact both sides were lifted by their substitutes. For Kilkenny this has been a feature. Players have been dropped and then re-introduced, done well, been re-selected for the next match and then replaced again.

Cody took the chance to start heavyweights Colin Fennelly and former Hurler of the Year Richie Hogan after their contribution in the previous week’s replayed Leinster final. It worked in that Hogan’s wizardry in the early stages bamboozled Limerick and he lasted the whole 70 minutes for 1-3 whereas Fennelly scored 0-2.

Anxieties that it left Kilkenny short on bench impact came to nothing, as Richie Leahy and John Donnelly, two of the season’s rotating forwards, made critical contributions: the former shooting 0-4 from play and the latter 0-1 and his assist for the goal.

TJ Reid found it harder to get into the match. Initially sited at corner forward, where coincidentally he had been switched to not great effect in the 2014 semi-final between the counties, to accommodate Hogan’s late introduction on the 40, he had moved back to his familiar position by the end of the first half but whereas he maintained the high returns of his free taking, a couple of shots from play went astray.

Limerick’s superiority in attack took a while to register. Séamus Flanagan lost the first high ball to Pádraig Walsh but came strongly into the match thereafter. His biggest challenge was his own use of the ball at critical times - sending a wayward hand pass to Aaron Gillane with the goal on and failing to gather a ball from Gearóid Hegarty that looked to have played him in.

Aside from that, the winners could have had four goals but for the intervention of Kilkenny ‘keeper Eoin Murphy, who maintained the standards of an extraordinary year by blocking out chances from Gillane, Flanagan and Hegarty.

Even so, by the end Limerick had scored 0-27 and 24 from play and all of the eight forwards used had got on the score-sheet.

Manager John Kiely did his best to suppress his delight and said of the now bridged 45-year gap, which also encompasses the county’s wait for an All-Ireland: “History has no bearing on this group of players; they would never be defined by it. They’re going to set their own tone, their own direction and that’s that.”

1 Ghosts and goalposts: The soul of street football in Dublin’s Gloucester Diamond
2 Rugby clubs in crisis: ‘I fear you may find a lot of players won’t go back playing at all’
3 Ian O’Riordan: Dreaming of one-way cycling over the Military Road
4 Farrell and O’Connell provide insight into changes in Ireland’s analysis
5 Sideline Cut: Vignette shows why Bird is the true shark in The Last Dance
Real news has value SUBSCRIBE

Michael Walker: Fans wish to be supporters, not spectators. There’s a difference. 08:00
Ghosts and goalposts: The soul of street football in Dublin’s Gloucester Diamond 07:00
Ian O’Riordan: Dreaming of one-way cycling over the Military Road 06:00
Rugby clubs in crisis: ‘I fear you may find a lot of players won’t go back playing at all’ 06:00
Federer named highest paid athlete of 2020 as Covid knocks Messi off top spot 21:25
Crossword Get access to over 6,000 interactive crosswords