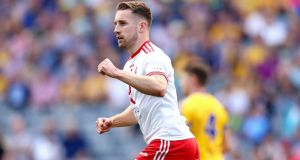 Kindly diverting from the fact this was more a super mismatch than anything properly super – except for the temperature – any team that scores 4-24 in Croke Park deserves closer inspection. Dublin we can surmise are doing that as we speak.

The lingering feeling out of Saturday evening is that Tyrone are a team only approaching their peak, while Roscommon look well past theirs, at least for this season. Certainly gone was all the fiery spirit Roscommon ignited against Armagh the previous week.

There is some suggestion Tyrone’s tactic is mostly the counter-punch, or the constant nagging at their opponents’ Achilles heel, but that’s only partly the case. Once they have a team where they want them they move straight in for the kill, and Roscommon are just the latest victims of that.

Since losing to Monaghan in the Ulster quarter-final, Tyrone have now scored 2-14, 3-14, 0-18 and 3-20 – plus the 3-24 here, which featured 13 different scores, including goals from Niall Sludden, Conor Meyler, the fast improving full forward convert Richard Donnelly, and a penalty from the reliable boot of Peter Harte.

That’s an average of just over 24 points per game – maybe not enough to break down the All-Ireland champions in Omagh this Saturday evening, but decent potential nonetheless. Certainly manager Mickey Harte can hardly wait to welcome Dublin to Healy Park for a potentially super rematch with their All-Ireland semi-final conquerors from last year.

“It is something special, no doubt about it,” said Harte. “We could have been out of it altogether on the day we played Meath in Navan. We might not have been in this place at all. So we used some of our luck up that day. And then I think we learned to build on that.

Still Tyrone’s range and style of scoring was pretty super; in true Tyrone fashion, they quickly turned from hunted to hunter, and began to kill the game off as early as the 12th minute when Sludden fired home their first goal. It came directly from a Roscommon mistake, Enda Smith fumbling the ball around midfield, and two quick hand-passes later, Sludden carved through the Roscommon defence.

“It just shows that you can get your scores in many different ways,” added Harte. It doesn’t have to be the orthodox old-style anything. If you can create scoring chances and have people to take them, that’s good for me. And I think we’re trying to work the best way possible for our players to play the game.

“That’s what we’re trying to do. This is only one day. There will be different challenges for us next week and we’ll have to see how we respond to them. We can’t be saying much about what we’re doing until we meet the acid test, and the acid test is coming to Omagh next week.”

Roscommon will be super disappointed. For too long and too often they simply played into Tyrone’s hands, and sent plenty of loose passes astray. Manager Kevin McStay made no excuses – this 18-point defeat, double the difference in the end, effectively ending their Super-8 hopes unless they something big against Donegal in Dr Hyde Park next Saturday.

“Tyrone just really blew us away in the end,” he said. “No excuses for us, they were just too athletically and football-wise too strong for us, there isn’t a whole lot of positives out of our performance, the team knows that, we all know that we’ve had too many of these trimmings in Croke Park the last few years.

“The integrity of the group is at stake here, our development, and most of all our own pride is going to be at stake. We’ve had a reaction from these sort of hammerings before, so we’d look forward to things being a bit better next week.

“Then the gap that we were hoping Tyrone wouldn’t get, that we were planning not to give them, all of a sudden they had it and they are so hard to play against once that gap opens up but fair play to them, their athleticism, their conditioning, it’s way ahead of ours and we couldn’t live with it.”

Tyrone, McStay admitted, were a class apart – partly because Roscommon allowed them to be. Dublin next Saturday should ask a few more questions

“We didn’t test them, they’ll be tested next week obviously,” he added. “But they look a good team, they’ve lovely footballers, so comfortable with the ball in hand, they’ve serious conditioning, and they’ve a system they believe in.

“And it’s very hard to play against that system. This is my second or third time coming up against it, and it’s a very difficult system to play against, it just drains the life of you... and they’re expert at it. So they’re going to push just about anybody they play.”

Tyrone were more than double scores up at half time, 1-10 to Roscommon’s 0-6, and no more than they deserved. Two second-half goals were pure consolation for Roscommon, Smith giving himself some redemption when cutting loose from the right side of the Hill 16 end three minutes into the second half, and burying the ball past Niall Morgan. Ciarán Murtagh added a second goal on the hour mark but by then Tyrone were in super cruise control.

That penalty from Peter Harte and two more goals – the first from Meyler, the second from Donnelly at the death – meant Tyrone finished with 13 different scorers in all, each one as easy and free as the next. Colm Cavanagh was typically industrious and as the game closed out their counterattack proved impossible for Roscommon to handle.

“You don’t end up with that kind of margin without working hard,” added Harte. “Our players worked our socks off out there. I think it was good for them. It gave them the chance to use up all their energy and see what they had in them when they had to go all out. I’d be happy enough with the way the games went.”