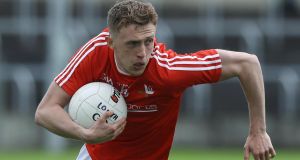 Ryan Burns scored 2-3 for Louth as they beat Laois in the Allianz Football League at Croke Park. Photograph: Lorraine O’Sullivan/Inpho

The decision to strip Laois of home advantage for a breach of training rules in 2018 looked as if it might actually work against Louth as Laois played there three times last year.

But it was Louth, beaten by Longford in round one following relegation last season, that enjoyed the unexpected headquarters run-out with three goals inside the first 16 minutes from Burns (two) and Conor Early.

Laois had Kieran Lillis sent off in the 20th minute for an off the ball offence.

Ross Munnelly, 36, was recalled to the Laois team and scored 1-6 overall, including a goal before half-time but Louth led 3-4 to 1-6 at the interval.

The drama levels dropped considerably in the second half with Laois registering just two points from play in the entire game. Louth added on points from Burns, Conal McKeever and Sam Mulroy but lost John Clutterbock to a second yellow card in the 77th-minute.

1 St Michael’s conveyor belt showing no signs of slowing down
2 Pitchfork pundit Joe Brolly taking the subscription TV dollar? Say it ain’t so!
3 Welcome to Iten in Kenya – home of champions and cheats
4 Leinster lead the Irish charge on defining weekend for provinces
5 Munster mood will be determined before kick-off
Real news has value SUBSCRIBE