Who is Steven Poacher? The man helping to plot Carlow’s rising 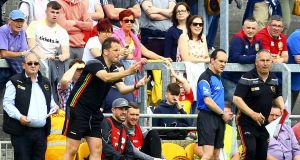 Local band Oasis have just released their third studio album, Be Here Now, the then fastest-selling album in British chart history. Manchester United have started another Premier League season as champions. And 19-year-old Steven Poacher from Down arrives on campus as a student of PE with a passion for Gaelic football.

“Ach, they were the good days in Manchester. Oasis. The Hacienda, the Tiger Tiger. You’ve heard of that place? And I actually set up the Gaelic football team at the university. I went to the local bar, asked them if we come in here on a Sunday, and drink on a Sunday, will they sponsor our kit. And I swear to God, three years later, when I left, it was probably the most popular Irish student bar in the place.

“I played and managed the team, and we’d some beautiful footballers, too. And it resulted in the university awarding me full colours for the contribution to Gaelic Games, which was strange in England, unheard of over there at that stage. But I think when I went to college there, you had to rely on your personality a bit as well.”

Poacher is recounting this story in the Mount Wolesley Hotel, not long after a Carlow football training session, ahead of what might be a defining game in the county’s history: Carlow haven’t reached a Leinster football final since 1944, and standing in their way in Croke Park on Sunday are a Laois team who, like themselves, have just risen out of division four.

But the story of Carlow’s rising (and that word is justified) is a little more revolutionary, given where they’ve come from. How the 39-year-old Poacher, from Newry, got to play his part is proof it hasn’t happened by accident either – or indeed without a little poaching.

“Look, I’m a Down man at heart, of course I am. But I never thought I’d feel as much passion and enthusiasm for a county as I’ve felt here in Carlow. Something just clicked. I’ve been welcomed with open arms. Maybe it’s the old saying: ‘You can’t be a prophet in your own land’. But I don’t need to prove myself to anyone in Down, definitely not the administrators anyway, the man sitting in the office and has never coached in his life.”

Poacher has some proof when it comes to football coaching – even without that senior role in his county: after his initial success at Manchester Met, he later coached St Columban’s Kilkeel, where he teaches PE, to an All-Ireland Vocational Schools title in 2007 (the school is closing due to dwindling numbers; he’s taking up a new post in Armagh): “That gave me the bug then to push on, and get involved at club level. Players don’t give a damn what you know until they know you care.

He later trained Mayobridge and the Down under-21 football team, which featured a young Marty Clarke, and who recently described Poacher as “the best coach I’ve ever trained under” (along with Paddy Tally). “John Wooden, the great American basketball coach, always said the two greatest traits any coach can have are industry and enthusiasm. And that’s critical for me. Don’t get me wrong, sometimes I’m going down the road asking myself should I be leaving, maybe the child is not well or something. But you lift yourself, put on a show, because players feed off that.

“If I can leave Newry on the bell, it’s about an hour and 40 minutes, there and back. And you get to know them as people, and the respect grows as well. It works both ways, it’s not a one-way street. Football for me is about writing your own script, going against the grain, and I think this Carlow team, not just on the field but off the field, has gone against the grain a little bit.”

Meath 7-13, Carlow 0-6. A low point in an already low period in Carlow football, the season is over a month later with the qualifier defeat to Clare, 4-26 to 2-13, after which Carlow manager Anthony Rainbow, a Kildare football All Star, steps down. His selector, Carlow native Turlough O’Brien, agrees to take over at a time precious few others put themselves forward.

“We were fortunate that we got all the players in the county that we wanted in. Or 95 per cent of them, at least. There’s always one or two that maybe have a reason they can’t commit. We got a great buy-in from the players and from the clubs, and that was really the secret to it, that we got everybody on board. Look, we made a bit of progress over the first couple of years, and then Stevie [Poacher] came on board and he added a whole new dimension to it, to be quite honest with you, and players really responded to him.”

Turlough O’Brien is recounting this story in what is now his fourth season as Carlow manager, though he actually brings a lifetime to it. The road in Carlow that he lives on is named after his father, Jim, the long-serving Carlow county secretary and, like his father too, even longer servant to Éire Óg, who later won five Leinster club football champions in the 1990s.

As native as he is, O’Brien saw the value in bringing in some outside influence when it came to football coaching. That began at a coaching conference in Kilkeel, organised by Poacher as a fund-raiser for St Columban’s, during the 2016 season: by the start of the following season, O’Brien had him on board full time.

“When I came in first, I would say that maybe our training stepped up considerably in terms of coaching. As well as Steven, we have a very good backroom team – Damien Sheehan is in charge of strength and conditioning, he’s head of strength and conditioning in IT Carlow. We had access to IT Carlow. And I think people knew that we were 100 per cent Carlow, really. We’ve had a lot of outside managers and I think sometimes you appoint a big-name manager and you leave him there, ‘job done’, and he doesn’t get the support that he needs. They’re the sort of issues that cripple counties at times.”

Carlow 2-17, Wexford 2-13: Carlow’s first win in the Leinster football championship in six years sets up a quarter-final meeting with then back-to-back All-Ireland champions Dublin. They lose 0-19 to 0-7, then go on to beat London and Leitrim, before losing to Monaghan 1-12 to 1-7. It’s still Carlow’s longest run of games in the football championship.

“What the Dublin and Monaghan games last summer did for this county, not just these players, cannot be measured,” says Poacher. “You cannot put a price on it. Suddenly there’s passion and pride in wearing the Carlow jersey again.

“It’s the same with the FA Cup, starting out with 700 or so teams, all dreaming of that one game against Chelsea or Man Utd. And the Champions League, in the qualifiers, all dreaming about that one big night against Real Madrid or Barcelona. They’re not going to win it, but they’re going to have some night, and a massive impact on that club or that country.

“But after the Monaghan game I was devastated. There was a crowd on the pitch for one hour after that game. I looked at Daniel St Ledger, and he looked at me, and that look ‘Yeah, one that got away’. We didn’t even need to say it. It was 0-9 each, with nine minutes to go, and there were four big plays, and we gave the ball away four times ... just deviated from the process. But we learned from the experience. We still think we could have been in an All-Ireland quarter-final. Now, you go down to Fenagh [the Carlow training centre] on a Tuesday night, the ladies are training, the camogie, the hurlers, the footballers. All eating together at the end. It creates a togetherness. It’s fantastic to see everyone doing well.

Carlow 2-14, Kildare 1-10: After securing promotion from division four of the league for the first time, and beating Louth 2-17 to 0-12 in the first round, Carlow secure their first championship win over Kildare since 1953, and only their third ever. Paul Broderick hits 0-11 of their tally on a day Carlow d

“First and foremost, it’s coaching. You could say belief and you could say stuff like that, but coaching has instilled the belief in us, that’s the way I feel. And Steven has been a sensation. Like, he might harp on about the presentation of a pass. He’s a teacher himself, and he says: ‘You wouldn’t hand up a crumpled piece of paper or the corners missing off it – you’d tell the student to do it again or whatever.’ We started with the fundamentals, not that the lads didn’t know how to hand-pass, but you build from there.”

At 31, and after undergoing 10 football-related surgeries throughout his career, Broderick is recounting this like a player in his debut season.

“And his energy, enthusiasm, and the way he gets a message across. I don’t know how he’s managed to fit in like he has, in such a short space of time. But Steven knows most lads’ families. He knows seven or eight of my family, and it takes very little effort. Or maybe it does, but he does it.”