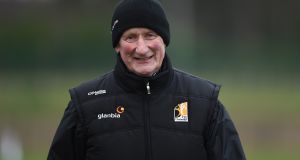 Kilkenny had their expected comfortable win against Westmeath in Sunday’s Walsh Cup game in Mullingar, but the home side recovered well from a disastrous opening quarter of an hour to put a reasonably respectable look on the final scoreboard.

Early goals from Walter Walsh (two) and Jonjo Farrell propelled Brian Cody’s charges to a 12-point advantage after 14 minutes, and an interval lead of 3-12 to 0-8. Goal Despite conceding another goal to Farrell within three minutes of the resumption, Westmeath went on to shade the second half, with goalkeeper Paddy Maloney and veteran forward Brendan Murtagh in fine form for Michael Ryan’s troops.

Winners of their only title two years ago defeating Dublin, Galway are through to another semi-final as a result of their victory over new-look Laois team at Rathdowney.

Not since 1984 had a Laois team recorded a victory over the Tribesmen and with the sides due to meet again in the Allianz League Michael Donoghue will be the happier of the two managers.

The game produced some good passages of hurling and Laois kept in touch with the visitors thanks mainly to Neil Foyle and Ben Conroy landing excellent points but Dan Nevin ensured a half-time lead of 1-9 to 0-8 for the visitors the goal coming from Joe Cooney after twenty eight minutes. Keenly contested The second half was keenly contested and with 15 minutes remaining the margin was back to two thanks mainly to some brilliant goalkeeping by Eoin Fleming in the home goal.

Galway exerted pressure in the closing 10 minutes with points by substitute Seán McInerney and Jason Flynn to earn a meeting with Carlow IT next weekend.

Needing to win their final Walsh Cup game, Offaly also needed to prevail by a four-point scoring advantage if they were to leapfrog IT Carlow into a semi-final.

And while Kildare seemed like a small stile to cross, a two-point win was not enough for progression as Kildare pushed the Liam MacCarthy side to the final whistle.

Leading by only one-point at half-time (1-12-2-8), Offaly depended on a ninth minute Seán Cleary goal and two further points to offset two late first-half Mark Delaney goals to marginally keep ahead of a side which included Kilkenny permit player, John Mulhall.

Against the run of history Kildare eventually took a four-point lead in the 57th minute through the free-taking of David Reidy. But with Shane Dooley matching his feat, a second Cleary goal in the 64th minute gave Offaly enough for a win but not for progression in the Walsh Cup semi-final.

Antrim had nine points to spare over DCU at Ulster University, Jordanstown.

Four goals from Neil McManus and one each from Conor McCann and Conor Johnston proved the crucial scores for the home side.

Antrim looked set to take control when McCann and McManus both raised green flags in a two-minute spell midway through the first half to take a 2-4 to 0-4 lead. DCU lead But a goal from Paul Kelly and points from Ciarán Dowling, James Mulally, Tony French and Colm Currie helped DCU to a 1-11 to 2-7 half-time advantage.

Kelly extended the lead just after the restart but over the next quarter hour, Antrim managed to outscore their visitors by 3-4 to 0-2 to secure victory.