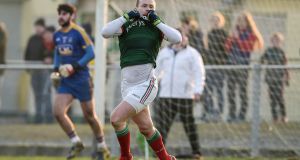 The home side were leading by eight points when Cillian O’Connor converted a 66th minute penalty following a foul on Jason Gibbons.

But that was only the start of the drama. Moran, who was only introduced in the 67th minute, eroded the deficit with another green flag with just a minute remaining - before brilliantly finding the net again from an acute angle in the fifth minute of injury time.

There was some consolation for Roscommon, however, as they will meet Galway in next weekend’s Connacht League final by virtue of their superior scoring difference.

Mayo recovered from a poor start to dominate the second quarter and take a one-point lead into the half-time break. Enda Smith’s fifth minute goal had given Roscommon an early platform but when Liam Irwin finished off an incisive Mayo move to the net eight minutes later, last year’s defeated All-Ireland finalists were back in contention.

Leading by 1-9 to 1-8 at the interval, an early O’Connor free hinted at further Mayo dominance but they lost their way completely as Roscommon wrestled back the initiative.

Smith’s second goal of the afternoon - a fine finish after a brilliant run - was the catalyst. O’Connor responded with a free but seven unanswered Roscommon points from Enda Smith (2), Donie Smith (3), Tadhg O’Rourke and Niall Kilroy put Kevin McStay’s charges in the driving seat.

Yet Mayo mustered up the resolve, despite having Conor O’Shea sent off for a second yellow card, to find a way back into proceedings and complete a dramatic comeback.

Sligo brought on 14 subs in the course of the game and it nearly backfired in the second half with a solitary Niall Murphy point their only score of the half.

Sligo got off to a dream start with a goalf rom Murphy after 60 seconds of the first half and the home side were six points in front after five minutes.

Mark Breheny put Sligo 2-8 to 0-2 in front with a 12th minute goal to leave Leitrim a mountain to climb.

Gary Plunkett, scorer of three of the visitors’ first half points, Emlyn Mulligan and Brendan Gallagher were prominent for Leitrim in the opening half.

But Sligo’s industry and slick passing movements gave them a deserved 2-12 to 0-6 interval lead.