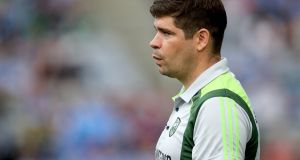 A big year beckons for Kerry and Eamonn Fitzmaurice with the imperative to launch an overhaul of the team that has proved competitive in the past two years but not ultimately successful. Photograph: Inpho

With the end of January in sight, the pre-season tournaments are shifting gear with counties getting ready for the onset of the Allianz Leagues, which will start to launch next week. The first silverware will be presented in Munster, as the McGrath Cup is decided in the Gaelic Grounds.

(All games on Sunday)

A big year beckons for Kerry with an impressive rising generation of under-age talent and the imperative for Eamonn Fitzmaurice to launch an overhaul of the team that has proved competitive in the past two years but resolutely in the chasing pack. It’s a typical conundrum for the county, which after all were All-Ireland champions just three years ago and in an environment that traditionally has a short way with the concept of “rebuilding”. The under-21s will also be reaching to maturity now that the first wave of minor All-Ireland winners from 2014 come up to the age.

Limerick have done well to reach the final with a couple of key players out for the long term and new manager Billy Lee has been hard at work getting as many as possible on board for the promotion push in Division Four. They haven’t won the McGrath Cup in 12 years and whereas that’s unlikely to change, this can be a useful exercise.

Dublin have decided to persevere with Paul Clarke’s development team for the rest of the tournament and this presents a decent opportunity for Kildare to record a win over the All-Ireland champions. Cian O’Neill’s side have been going well, winning all group matches and welcome back Paul Cribbin for his first start of the season. Meath and Louth met also in last year’s semi-final, with the former coming out on top. Louth have had their best first-round campaign in a while and have a good recent record in Navan but the home side have been impressive under new manager Andy McEntee.

Derry emerged from a pile-up with Armagh and Down in the group but Monaghan may have the edge after a solid campaign that saw them finish with a 100 per cent record and with Conor McManus’s return to action. Tyrone squeezed out of their group with hopes of a sixth successive title intact and take on Peter McGrath’s Fermanagh, who have done a good job to date of regrouping after some early season withdrawals.

Roscommon get an early bite at Mayo but their neighbours are well under-strength and Kevin McStay’s side, for whom some of the injured players are starting to return, should seal a renewal of last year’s final against Galway. Leitrim get a chance to get last week’s trimming by Galway out of their system but Sligo are likely to have other ideas.

Waterford and Clare dominated the early summer last year and now in experimental mode, get re-acquainted after midweek defeats although Waterford’s narrow loss with an experimental line-up against in-form Cork wasn’t a bad display. Limerick have had a Jekyll and Hyde season to date but can give themselves a good shot at a final place by winning in the first of the double bill against Kerry.

Speaking at Thursday’s Bord Gáis Energy media event in Croke Park Kilkenny’s Paul Murphy was on message as the team reassemble after their holidays. “When you’re putting yourself in contention for these things, it’s just the way you have to see it because you want to be winning them and when you’re training –like we’re training the last 10 days now – up until September, to lose the one match that you want to win, that’s effectively a waste of a year because that’s what you’re training for - to win the All-Ireland.

Westmeath are this week’s building block