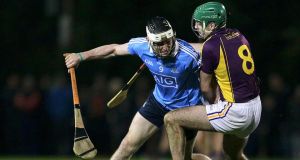 The victory achieved in front of almost 3,000 supporters sees the Model County set up a home semi-final meeting with Kilkenny but they had to call on all their reserves of stamina to see off this Dublin challenge in the second period.

Wexford opened the game at a frenetic pace, in what was their first major test under Davy Fitzgerald’s regime, moving into a 0-3 to 0-1 lead inside the opening seven minutes through Conor McDonald, Lee Chin and McDonald once again, while Domhnaill Fox managed a Dublin point in between.

Dublin, through Caolan Conay and Niall McMorrow, had got back level at 0-3 each, but the home side had stretched into a 0-8 to 0-5 lead when Podge Doran shot home a magnificent goal following a great Paul Morris crossfield ball after 17 minutes to put his side six points clear.

Chris Bennett picked off a fine Dublin point but with the sides continuing to trade points with McDonald, Chin and Morris finding the target for the home side, it was Chris Crumm and McMorrow who took the credit for Dublin, but it was still Wexford who led 1-11 to 0-9 at the interval.

The Dublin defence struggled through the opening half, but they managed to step up the tempo of their game on the resumption. After a Doran point had extended the home side’s lead it was Dublin who took the initiative with McMorrow, Crummy and Bennett all on target with points, leaving the side’s deadlocked 1-12 to 0-15 after 57 minutes.

Played at a tremendous pace throughout there was little to separate the sides with Morris and Bennett exchanging frees. As McDonald and Conay once again swapped points the sides were level, 1-14 to 0-17, with four minutes remaining.

Having lost their way for a spell Wexford still managed to put in a storming finish. A huge Richie Kehoe free put the home side back in front but Dublin squandered two chances, shooting wide from long ranges as they strove to regain parity once again.

With the result still hanging in the balance it was an 80 metre point from a Chin free that put two points between the sides, with Chin having the final say in additional time with a run and excellent finish to kill off the Dublin challenge.