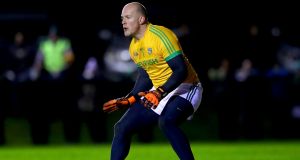 In what was a full-blooded encounter Louth enjoyed a rare success over 14-man Meath to set up an O’Byrne Cup final date with Dublin at Pairc Tailteann yesterday.

The match lacked quality for the most part but that was more than compensated for by an abundance of incidents and talking points.

Referee David Moore (Laois) was kept busy throughout and he flashed one red card, two black and eight yellows over the course of a hard-fought encounter.

There was also an appearance by substitute ‘keeper Joe Sheridan in the closing stages which brought about the biggest cheer of the day.

However Sheridan’s first task was to pick the ball out of his own net after he replaced Jack Hannigan who was black carded for an off the ball foul on Sam Mulroy which resulted in a Louth penalty.

It took Louth 15 minutes to get off the mark through midfielder Tommy Durnin but they were level at 0-4 each by the 32nd minute - and eventually led 0-6 to 0-4 at the break.

The Wee County finished the half strongly with the last four points after the hosts had been reduced to 14 men.

Louth defended their lead by crowding out their own half of the field, Meath had gone a full 30 minutes since their last score.

By the time Bryan McMahon raised a white flag, Louth had shot four further points to tighten their grip on proceedings.

The introduction of Conor Downey and Cillian O’Sullivan brought about a mini revival for Meath and they had reduced the deficit to two points, 0-10 to 0-8, by the 56th minute.

However Louth were not going to be denied on this occasion and they extended their lead back to five before Jim McEneanay made certain of victory when smashing that penalty kick past the despairing Sheridan.