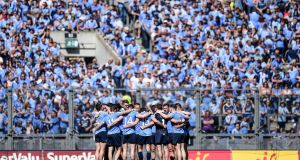 The Dublin team gather in a huddle in front of Hill 16 ahead of the Leinster football final against Westmeath last July. Photograph: Tommy Grealy/Inpho

Leinster Council accounts for 2016 show that for the second year in succession championship gate receipts declined within the province, registering a fall of €927,339 on the previous year and a €1,209,979 drop compared to 2014. A total of €3,413,767 was taken across both the football and hurling championships in the province in 2016.

The figures reflect some of the difficulties caused for the provincial football championship by Dublin’s domination which in 2016 saw the county win an 11th title in 12 years.

Last year saw a fall in attendance at the Dublin-Westmeath football final from 47,890 in 2015, when the same counties contested it, to 38,855 last July. Circumstances in June also conspired to produce the poorest attendance at a Dublin-Meath championship match in 33 years.

The crowd of 42,259 at the Leinster semi-final double bill – along with Westmeath-Kildare – has to be seen however in the context of a late start in order to avoid a clash with Ireland’s second-round match against France at the European Championships.

In his report to the Leinster Convention, which will be held next week on Saturday January 28th in Carlow, provincial secretary Michael Reynolds will speak in defence of referees, who have encountered controversy in administering the black card.

“Over the year the black card received much publicity. Some of the negative comments were justified. But that said it is worth noting that referees (without whom we would not be in business) endeavour to implement the rules as given to them fairly – whatever about consistency. As for consistency – what is consistency?

“And who is to say that everyone has the same definition of consistency? Similarly for ‘let the game flow’ or ‘advantage’. In my early days working in the area of Post Primary Schools a very popular and good referee gave me a rather interesting definition of ‘Injury Time’ from the perspective of the two teams involved in a given match:

“‘For the winning team they want you to blow it up, for the losing team you didn’t play enough injury time’. Is it any different in our attitude to any aspect of our playing rules/cards/fouls? Does it not really depend on which side of the fence we are on for a particular incident?”