Lake County win title for the first time since 1988 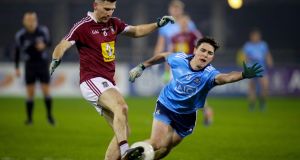 Westmeath produced an impressive defensive display in deservedly accounting for a lacklustre Dublin by five points in the Bord na Móna O’Byrne Cup final at Parnell Park on Friday night.

In doing so, the Lake County claimed their first O’Byrne Cup since 1988 and they were full value for their victory with wing forward Ger Egan leading the way with a match-winning tally of 1-5.

Following their facile win over Longford six days previously, Westmeath made the brighter start but failed to take advantage of some promising attacking positions as they registered two early wides.

The visitors were indebted to goalkeeper Eoin Carberry, who displayed sound reflexes in the third minute to thwart Stephen Smith after the Skerries Harps player had managed to pierce the heavily manned Westmeath defence.

Dublin were similarly profligate in attack initially as the normally reliable Ryan Basquel spurned two presentable chances, with Westmeath finally taking the lead through a fine Egan score in the eighth minute.

Irrespective of the Sigerson Cup commitments of a number of the players involved, the opening quarter still left an awful lot to be desired in terms of pace and intensity before the hosts finally awoke from their collective slumber to level matters through a Seán Bugler point in the 18th minute.

From the resultant kick-out, Aaron Byrne, who impressed in Dublin’s semi-final against Meath last Saturday, edged the hosts ahead with a smart score on the run.

That proved an isolated period of pressure from Dublin as their error count increased at an alarming rate, betraying their lack of group matches in the competition.

Westmeath, in contrast, looked far more assured and measured in terms of their interplay and after Kieran Martin had restored parity in the 23rd minute, they edged back in front after an excellent team score converted by Ronan O’Toole.

A point from substitute Tommy McDaniel doubled Westmeath’s lead as the half evolved and they could well have landed a significant blow in the 34th minute but Andy Bunyan reacted well to repel Noel Mulligan’s powerful low shot.

It was left to Byrne to offer Dublin a degree of optimism towards the end of the half with his wonderful solo score trimming his team’s deficit to a solitary point (0-5 to 0-4) by the interval.

Dublin’s lack of cutting edge up front was addressed at the break with the introduction of Colm Basquel and Conor McHugh but it mattered little as their opponents raced out of the blocks upon the restart through a brace of Egan points and O’Toole’s second score of the night.

Egan and McDaniel continued on their merry way, extending their team’s lead as Dublin’s frustrations grew with every passing minute, failing to make any impression against the defensive excellence of Boldu Sayeh and Ronan Wallace.

Egan’s goal, scored at the second attempt in the 58th minute, put paid to any notions of a Dublin comeback with a point from substitute Ger Leech putting the finishing touches to a confident display from the winners.