Tyrone hold on to set up McKenna Cup final with Armagh 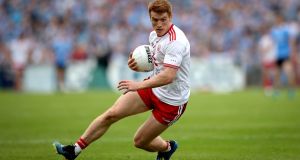 Tyrone scraped past a determined Derry side to book their place in the Dr McKenna Cup final, with Peter Harte coming off the bench to hit five second half points at the Athletic Grounds.

But Tyrone finished the first half strongly, with Ronan O’Neill, Ruairí Sludden and Conall McCann hitting the points that sent them in at the break level on 0-6 each.

Tyrone boss Mickey Harte paid tribute to their opponents after the match: “Derry showed from early on that it was going to be a bit of a battle, scores were going to be hard to come by, there was plenty of defenders back marshalling their own sector of the field, and we found it difficult enough to break them down.”

Harte introduced Peter Harte and teenager Darragh Canavan at the break, and both made a big difference up front, with Harte hitting five points.

Derry were ahead, however, nearing the end of the third quarter, after Patrick Coney had smashed home a brilliant goal.

But they scored just one point in the closing half-hour, while Harte’s frees saw the Red Hands home to a meeting with Armagh in next weekend’s final.