Restriction on hand-passing teetering on the brink of rejection 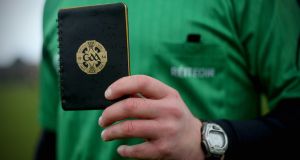 A player who receives a black card is punished by 10 minutes in the sin-bin rather than automatic substitution by a replacement. Photograph: James Crombie/Inpho

The restriction on the hand-pass is teetering on the brink of rejection at Saturday’s meeting of the GAA’s Central Council at Croke Park.

It has also been confirmed that any football rule changes, which make it through trial and review, will go before a special congress in the autumn and potentially come into regulatory force in a year’s time.

During the pre-season competitions, which conclude this weekend, the limiting of players to three successive hand-passes has been the most controversial of the proposals advanced for trial by the Standing Committee on the Playing Rules.

A chorus of dissent from county managers and many players has greeted the initial weeks of the experiment and there are concerns that the trial period won’t be extended as planned to include the national league.

On Thursday the Gaelic Players Association released details of a survey, which indicated that, although player opposition has receded a little since the proposals were first aired in November, it still runs at 90 per cent.

More tellingly, there have been signals from amongst the referees that they are finding the implementation of the rule difficult.

Some are counting out the hand-passes in order to keep track and assist the teams but even this is prone to sabotage with one referee reporting that players have been shouting out random numbers to confuse the situation.

“A referee doesn’t count out steps,” according to one official. “It’s almost a perception. An instinct. That’s what makes the hand-pass restriction the one rule of these proposals that stands out.”

The experimental rules were the result of data-based deliberations by the SCPR, chaired by Derry academic David Hassan, and based on findings by football statistician Rob Carroll, who was also asked to conduct an independent review of the matches to date in the provinces. His findings are believed unlikely to trigger a major rethink.

The rules are intended to address the rising ratios of hand-passing to kick-passing, which hit 3.4:1 in last year’s championship.

There have been competing opinions that rather than creating defensive football, the hand-pass is a product of it and that steps to address the former would alleviate the latter. Against that it is a fact that the steady eclipse of kicking in the game predates the arrival of blanket defences.

Whereas it is believed that the GAA may be open to compromise on its efforts to address these concerns, the SCPR remain optimistic that the hand-pass restriction can secure a green light at Saturday’s meeting.

This isn’t mere whistling in the dark. In November when the trial was accepted, Central Council’s zeal for reform surprised many. Estimates that the ruling body would be unlikely to accept five rule changes for trial proved inaccurate and the margin of 60-40 was also unexpectedly emphatic.

There is also the urgency that rules experiments on this scale can only take place every five years and if the opportunity is let slip, there will be no way of influencing the game’s evolution until 2024.

The other four proposals are thought to have a good chance of acceptance although there are anomalies over the implementation of the sin bin, which runs for 10 minutes but unlike in rugby, which pauses the clock for breaks in play, those minutes are at present inclusive of stoppages.

It is also expected that ticket prices for the national leagues and All-Ireland finals will be increased. The latter will go up by €10, the first rise since 2011.

League tickets will prove more controversial, the jump from €15 to €20 represents a 25 per cent increase in four years but Croke Park sources point out that admission will still be available for €15 if supporters pre-purchase.

The additional revenue is to be earmarked for specific projects, details of which will be announced on Saturday, assuming Central Council approve the price increases.

1)  Hand pass to be restricted to three in succession before ball must be kicked.

2)  Sideline balls must be kicked forward except when in or on the opposition 20-metre line.

3)  An attacking mark may be taken inside the opposition 45 provided kicked in play from within the opposition 45 and travelling at least 20 metres. (Although not widely mentioned this also allows a defender to make a mark under a dropping ball.)

4) A black-card infraction to be punished by 10 minutes in a sin-bin rather than automatic substitution by a replacement.