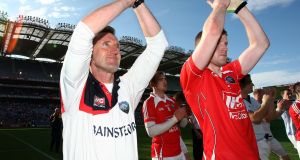 This year’s football championship is about to resemble a Grand National. The flag goes up this Saturday and the weekends ahead promise to be fences with plenty of fallers given the lack of a qualifier series to dispense second chances.

It’s all of 20 years since the championship was sudden death and this year’s retro format means that there are no second chances, no course back into the season once the provincial interest is ended.

So, nine counties will have their season wrapped up by Monday morning. In Leinster three first-round ties are down for conclusion – there will be extra-time and penalty shoot-outs to make sure of that.

Peter Fitzpatrick played for and managed Louth. In the latter capacity he was ringside for one of the great traumatic reverses in GAA history 10 years ago when his team were denied a first Leinster title in 53 years by a completely invalid goal attributed to Meath’s Joe Sheridan.

Fitzpatrick remains a busy man as chair of the county board and an Independent TD for Louth. He was sceptical about the return to play but is happy enough with the opportunity it offers his county even with no second chances.

“I think most counties are happy to get one bite of the cherry. I was one of those who felt strongly at the time that the intercounty season shouldn’t go ahead. I still stand by that but as chair of the county board, I see the effort put in by Louth and the young fellas coming through.

“One game or two, this year’s championship is a bonus for any county and I’m glad as an ex-Louth player and manager that players will get that chance because the way coronavirus is going we’ve no idea whether we’ll even have a championship in 2021.”

As soon as the 2010 season was over a few of our players – better players – went off to Australia. If we’d beaten Meath I’m not sure they’d have gone.

By coincidence 2010 started as this year does with a match against Longford. Louth were relegated before the season resumed three weeks ago but Longford survived comfortably although there was controversy over their decision to concede the final fixture to Cork.

In a way the stark imperative doesn’t make a huge difference to Louth, who in the 19 years of the qualifiers were one of just nine counties never to reach the last eight. It remains a puzzle for Fitzpatrick.

“I always felt for example that we were as good as Kildare but they always did better in the qualifiers for whatever reason. I don’t know what it is but even in 2010 we beat them in the championship and they went on to reach an All-Ireland semi-final and we were gone before the quarter-finals.

“This year in Louth we learned a lot. We ran a championship over 10 weeks and it was probably the best one we ever had because footballers were getting regular, guaranteed games. It worked really well. But in the past, say Louth got knocked out of the championship in late May or June, the club stuff would start immediately before the county was even finished in the qualifiers.”

Relegation to the bottom tier gives the county, he feels, a ground zero opportunity, and for him the way has been shown by the success of this year’s improvised split season.

“I know people give out about Dublin but I think they’ve put in fantastic structures and development systems. I always look to the good teams that do very well and Dublin’s up there with the best of them.”

Fitzpatrick doesn’t favour structures that move too far away from the traditional championship, citing the solid argument that without provincial championships, you’re effectively removing four titles from circulation.

“I hope they never do away with the provincial championships. They’re fantastic goals and ambitions for counties like Louth that mightn’t have won one in 60, 70 years.”

He’d hardly be human if he didn’t reflect on 2010 and how the Delaney Cup was dashed from Louth at the last minute but he is more wistful, thinking about a future that never happened.

“If we had won, I think it would have been different. That was such a strong team, as strong as Louth had in years. Two weeks after the Leinster final Dublin beat us in the qualifiers and got two early goals that we never recovered from. As soon as that was over a few of our players – better players – went off to Australia. If we’d beaten Meath I’m not sure they’d have gone.”