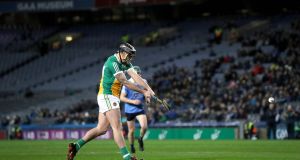 Offaly delivered a performance of encouraging quality and intensity in hammering a disjointed Dublin by 13 points in their one-sided National Hurling League Division 1B opener at Croke Park on Saturday evening.

There was much to admire in the manner they controlled matters as they outmuscled and outthought a Dublin team that resembled the infamous ‘startled earwigs’ attributed to manager Pat Gilroy’s 2009 senior football side.

Gilroy will need all his renowned motivational and man-management skills to lift Dublin after a performance that highlighted their current inadequacies and while it is unfair to pass judgement so early into his tenure, it’s equally evident the sizeable task that he faces in returning the team to recent relative glories.

It was the visitors that played the more compelling hurling in the first-half and they were unlucky not to find the net on two occasions with returning Dublin netminder Alan Nolan repelling two fine efforts by Oisin Kelly.

However, their largely impeccable point-taking ensured a deserved five point interval lead as they sieved the initiative from the outset through points from Kelly and Joe Bergin.

Chris Crummey, named as Dublin captain, opened the home account with an excellent solo score in the eighth minute and the Dubs looked to be finding their stride as Paul Winters and Fergal Whitely added scores soon after.

That impression proved misleading however as Offaly assumed control with midfielder Shane Kinsella catching the eye with three first-half scores.

A Paul Winters goal, following a superb run from deep by Shane Barrett in the 26th minute, briefly stalled Offaly’s momentum but a flurry of late scores that included a brace apiece by Bergin and Damien Egan ensured a healthy 0-16 to 1-8 advantage at the break.

The contest resumed in a similar vein upon the restart as Dublin continued to undermine their challenge with rudimentary errors and Bill O’Carroll’s rash challenge on Conor Mahon allowed substitute Shane Dooley to extend his side’s lead through a 38th minute penalty.

The contest was effectively settled in the 64th minute as substitute Liam Langton made an instant impact as he left Cian Hendricken and Nolan in his wake before firing home with ease to complete a hugely impressive showing by Kevin Martin’s charges.