NFL Division One: All you need to know ahead of the new season 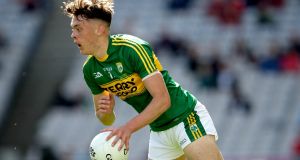 It’s doubtful if any footballer has had as sustained a trumpet blast heralding his arrival as David Clifford.

Most in need of a title

The easy and annual answer to this one is, Mayo. If only they could win the league they’d be better set up for the championship. That train looks to have left the station some time ago. Mayo have epically challenged for the All-Ireland in recent years without even getting to a league final since 2011. With an advancing age profile and the need to trial new faces they’re likely to do more of the same - enough to stay in the division.

More likely candidates are Tyrone. They have combined competitiveness with astral travel depending on the matches but there will surely be urgency this year to make a clarifying statement after last August as well as the need for a younger generation to move on after Seán Cavanagh’s retirement. The county’s recent league record in Croke Park is good: only one defeat in the last six matches (not all against Dublin) and if they can strike a more consistent note they will be contenders and moral will benefit accordingly.

Pre-season odds suggest that Kildare and Galway are set for quick returns to Division 2 but that’s a reflex reaction. In the 10 years of the hierarchical four-division league, the two promoted teams from the previous season have never been relegated straight back together. Now, in five of the operative nine years one of them has made a swift return. Galway have waited longest to return to the top but they have difficulties heading into the campaign. Corofin are still very much involved in the club championship and that together with injury is giving Kevin Walsh a less than ideal start to life back in the fast lane.

Donegal and Monaghan have also been mentioned in dispatches - the latter because under the new management of Declan Bonner there will be a fair bit of reconstruction to be done and some of the most experienced heads, especially Michael Murphy, aren’t available from the start.

Monaghan though have traditionally had more problems because of the need to maximise a small panel, which they have done remarkable efficiently but it’s a hard act to keep on the road.

Not alone have Galway and Mayo been in a constant arm wrestle in Connacht over the past while and next May will be their sixth successive year facing each other. Now, since Galway’s promotion, they’ll have the league for good measure as well. And that’s not all. In the FBD earlier this month, Kevin Walsh’s team eked out a win in Castlebar despite having three players red carded in the last 20 minutes.

Inevitably, attention focuses on Dublin’s home matches for the big crowds - and Kerry’s arrival on 3rd March ticks that box with an average attendance for the counties’ ordinary league matches of 30,000-plus - but two of the champions’ most intriguing fixtures will be away for a revisiting of their All-Ireland run-in last summer against Tyrone and Mayo.

Dublin haven’t lost in the league against Mayo since the fog-deferred meeting in Castlebar six years ago whereas the trips to Omagh have invariably thrown up memorable matches: Diarmuid Connolly’s wonder point in 2014, which kept his team afloat in the competition, the defeat that relegated Tyrone in 2010 and announced the arrival of Pat Gilroy’s team as a force. If you want to go back farther there was the less edifying ‘Battle of Omagh’ 12 years ago.

New kids on the block

It’s doubtful if any footballer has had as sustained a trumpet blast heralding his arrival as David Clifford, Kerry’s weaponised minor captain from last year, who accumulated 10-68 in 12 matches over two seasons at the grade. There’s a practised insistence that the county won’t have unrealistic expectations but even the mantra that’s become tells its own story.

In a normal year the focus might be on Galway full back Seán Aindí Ó Ceallaigh, whose spirited marking job on Dublin’s All Star Con O’Callaghan, in last year’s All-Ireland under-21 final forced the Young Footballer of the Year to get his scores elsewhere. Ó Ceallaigh defused the hype by going away during the summer but he’s back in time for Galway’s first top-flight campaign in seven years. No pressure there, either.