Limerick Camino pilgrims pray they will be home for the final 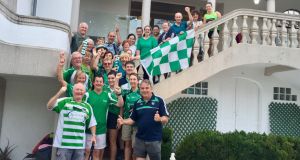 The final prayer for a group of Limerick Camino pilgrims this weekend is a simple one: “Please get us to Croke Park on time.”

The diehard hurling fans will have walked 120km by the time they complete the famous Camino de Santiago. However, it’s the flight home that they are most anxious about.

The 60-strong group booked their journey more than six months ago but little did they think they would be arriving home just hours ahead of what could be Limerick’s first All-Ireland victory in almost half a century.

“We are flying home on Sunday with Aer Lingus and due into Dublin airport at 12.30, but the big fear is that if anything happens and the flight is delayed we might miss the match,” says organiser Fr Eamon Fitzgibbon, who has been doing the Camino walk since 2006.

“We planned this Camino way back in early spring and when looking at dates we talked about the pope coming to Ireland and the need to be back for that, and then we also said we’d best be back for the All-Ireland final just in case Limerick might be in it. It was a long shot back then but we’re delighted it’s come in. Now all we have to do is get home on time.”

Among the Limerick Camino contingent is Donal Fitzgibbon, former chairman of the Limerick GAA County Board, along with representatives from every club in the county.

“We have people from all parts of the county – East [Murroe-Boher], City, West and South. I live in Patrickswell where three of the players are from, so needless to say the excitement there is just tremendous,” explains Fr Fitzgibbon, who adds that there are plenty of prayers on the trip being offered up for Limerick, and the responses have extra vigour.

“At our Masses, each time a prayer is offered for Limerick, it receives a resounding ‘Lord graciously hear us’. The nightly sing-songs have a very Limerick flavour and the excitement has been building all week. I always say everyone walking the Camino has a particular intention for which they are praying; however, we have three: first, that we can get a ticket; second, that the flight will get in on time; and third, of course, that Limerick will win.”

The group of Limerick pilgrims, aged from 21 to 70, started the Camino last Sunday, beginning in Valença just inside the Portuguese border and walking 120km to Santiago de Compostela.

“Apart from two Tipperary people, one Cork woman and a Clare man, we are all Limerick and all passionate about hurling. There’s been nothing but chat about hurling every day. We’ve gone through every permutation, every possibility and we’re still talking about it.”

Meanwhile, back home, as Limerick hurlers dream of bringing the Liam McCarthy Cup to Shannonside for the first time since 1973, the city and county is awash with green.

The oldest doorway in the city, which is located in the 12th-century St Mary’s Cathedral and is normally only opened for special occasions, has been clad in green and white, while 96 metres of fabric was used to wrap railings and gateways of the building.

“The cathedral is 850 years old this year and because Limerick is going to win on Sunday we thought it would be a good way to celebrate the two events together,” says dean Niall J Sloane.

Some 20,000 hurling fans who did not secure a coveted ticket for Croke Park will watch the match on a big screen in Limerick’s Gaelic Grounds, while massive crowds will also gather in the square in Newcastlewest where another big screen is being erected for the occasion.

The Limerick team is due to arrive home into Colbert Station at 5.40pm on Monday when – win or lose – they will be taken by open top bus to a homecoming event in the Gaelic Grounds.

If the hopes and prayers of a county are answered, Liam will also be on board.

Sky Sports customers save on bills; rule changes could change rugby utterly 07:25
Uefa meet to re-evaluate hopes of finishing current season 06:48
Gerry Thornley: Changes to tackle laws could transform rugby by time of next World Cup 07:18
My favourite sporting moment: Phil Mickelson’s miracle shot at the 2010 Masters 06:41
GAA: To date 2020 has been an imperfect view but there are pointers 07:19
Crossword Get access to over 6,000 interactive crosswords