Eamon O’Shea: We spent quite a bit of time talking about older people rather than to them 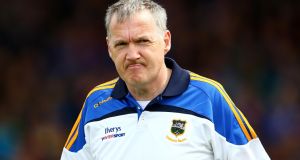 Eamon O’Shea works as an economics professor at NUIG whose area of expertise is ageing, gerontology and social policy. Photograph: Cathal Noonan/Inpho

Back around the middle of May, the thought occurred that it might be an interesting time to check in with Eamon O’Shea. Known chiefly in these pages as either coach or manager of various Tipperary hurling teams, he masqueraded as both the most over- and under-qualified water-boy in last year’s championship, frequently forgetting his bottle in his haste to advise players during matches. In real life, though, he’s an NUIG economics professor whose area of expertise is ageing, gerontology and social policy.

Earlier that week in May, people over 70 years old had been finally allowed out for walks but only at designated times and on the proviso that they had no interactions. The lockdown was still draconian across the whole of society but no group was more restricted in what they could do or who they could see than older people. So it made sense to text Prof O’Shea and get his take on it all.

“Always happy to talk,” came the reply, “but not right now. The generational issues are interesting and complex. Give me a shout in Phase 3, in about a month, if you’re still interested and I’m still relevant. E.”

In times like these, it would be hard to think of anyone more relevant. And so we met this week, the first foray out into the world at large for either of us since early March. “It’s hard to know how to act,” he said across a coffee dock table. “I have my mask in my pocket. The nuances of it all are interesting, how people behave and everything.”

Workwise, life in the lockdown wasn’t massively different to what it would have been otherwise. He tipped away on some projects, helped his PhD students along, kept himself up to speed with various bits of data. The comet’s tail from this will blaze for years to come and every bit of policy coming down the track in his area will be affected by it.

“One of the things to remind ourselves of constantly is that we’re still in the middle of this. It’s very early to be making pronouncements on how this pans out. It’s not impossible to say things but lots of things have happened that we’re probably still trying to figure out ourselves, let alone on a societal level and you have to be aware of that context.

“That said, this has been a momentous crisis. People were trying to deal with this crisis on the hoof. I think that when you have a large section of society being outside the daily functioning of that society, you do run the risk of forgetting about them. You do run the risk of not hearing their voice in a strong way. When that happens, there’s a high risk of policy only being made for the visible.”

In the fraught months of the lockdown, desperate measures became the norm. Older people became literally invisible, sequestered behind their own front door. It was well-meaning and for their own protection but we can’t pretend it wouldn’t have taken a toll. Though he was heartened by the solidarity younger generations showed to their elders when the crisis hit, it wasn’t all perfect either.

“At a very important level, the concern that people have for older people and their attempt to protect older people, you have to say that that was a strong desire within society. At both Government level and privately within families and so on. In a sense, that desire shows a strong degree of solidarity in society with the older generations.

“However, sometimes in that desire to help, we can do it clumsily. And I would have seen that in the language that was used, talking about the necessity for older people to be cocooning and so on. That wasn’t helpful language. And even just the fact that as a country, we spent quite a bit of time talking about older people rather than to older people. That didn’t always give the right message.

“It’s rooted in an innate ageism that is possibly within every one of us. It’s a popular narrative and culture that I think we need to think seriously about, in terms of our attitudes to age and older people.

“People reach 70 years of age and they reach it with a high degree of wisdom and a high degree of engagement, with all sorts of lives – personal, emotional, economic. And they’re very often well capable of seeing what the problem is and what they must do. So I think there’s always a line there between our desire to support people and give them enough autonomy to do the right thing themselves. And you just need to watch that.”

O’Shea has always warned about the perils of paternalism when it comes to how society treats older people. There is a line to walk, even in heightened times. When you take away someone’s autonomy – by Government decree, no less – you send them a message they don’t quickly forget.

“Even in very well-intentioned times, that can be true. The ability of older people to recognise the risks that apply now, to see the situation for what it is and to make their own decisions is crucial. Some of the things we do as younger people – physical exercise, communication, trying to have a social life – that is doubly important as you get older. That you still have that ability to go for walks, to do your own thing.

His grown-up daughter moved back in during the lockdown and they found themselves going on bike rides together, seeing new things in their locale that they passed in the rush of life before. He brought her to the places where they took her as a small child, spots she had forgotten and he was only now remembering. The pandemic gave them that and he’ll keep it forever now.

And there was hurling too. Well, there wasn’t but the very absence of it kept its existence alive for him. He lives in Salthill and every time he passed the local pitch or Pearse Stadium, he felt the loss of it and the need to have it again.

“You look at the pitch and you actually begin to imagine. It’s almost like you’re a kid again. You begin to imagine the players playing on it. Tipperary played Galway there in the league, it was our last game actually before it all shut down. So you go from a game there with lots of people interested and engaged in it to a couple of weeks later walking past it and there’s nothing, just nothing. And in a sense, that makes you realise what has been lost.

“That’s the kind of thing that I’m hoping we can get to at some stage by the end of the year. That element of shared, communal engagement is what we’re after. I always think of hurling as a language, a narrative that goes on parallel to all our other narratives. It has its own special ring for me anyway because we talk so much about it. And that kind of absence as well, you almost have to relearn little bits of it.

“In both good times and bad, they are innately connected with people’s understanding of the day to day routine of life, the almost banalities of life. In some senses, the banalities of life are life itself. We talk about banalities as if you could take them away and something magical would turn up to replace them.

“But for the majority of your life, nothing magical turns up. So you’re left with these little bits and pieces, the day-to-day which, when you add them up, you turn around and go, ‘Yeah, that was my life.’ And that’s what not having hurling has been like. The games, yes of course. But everything else that goes with them, just as much so.”

As defending All-Ireland champion, Tipperary will have back-to-back talk to listen to and plenty of chat that a winter championship won’t suit them. There’s club v county bubbling everywhere too, of course. None of it strikes O’Shea as important or even relevant just yet.

“You will be into a situation where the championship will be played in a couple of months. Hopefully we can get some people to attend those matches. I don’t see the fact that it will be played in a tight schedule as a big issue. I see it as being different but it has been a different year. The excitement that will come, whoever is contesting the All-Ireland final, it will still be a glorious occasion. A different occasion and one to be remembered as such.

“But we also have to set our expectations at the right level. We have to be aware that we can’t predict the future here, in terms of the disease or the virus. That’s why we need to embrace the club championship. We need to live now, to live whenever the games come. And to see those games for what they are.

“We might not get to a county scene, that’s the reality of it. So I will certainly be saying to all our players – get out there and have a real enjoyment of what you’re doing. Let’s worry about county stuff whenever we’re due back in September. But certainly, don’t be thinking about Tipperary now. Just get out and play. And be. Essentially, that’s the thing. Be. In every part of your life.”

For all your life.