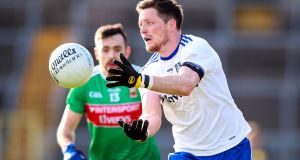 It’s fitting that if Conor McManus and his Monaghan colleagues are to win the All-Ireland they crave this year, they’ll do it the very hardest way possible.

Nothing has ever come easy for the tiny Ulster county that continues to shop in the big brand stores on the tightest of budgets.

Ulster champions in 2013 and 2015, and All-Ireland semi-finalists in 2018, the Division 1 regulars have been handed arguably the toughest route to Sam Maguire Cup success this year.

Starting in the preliminary round in Ulster against Cavan, straight off the back of Allianz League ties against Kerry and Meath, they’ll play six weekends in a row if they reach the Ulster final.

If they make it to the All-Ireland final, it’ll be eight weekends out of a possible 10 of going to the coalface to scrape out results and performances.

Whining has rarely been Monaghan’s thing so a county that fielded the least players of all the Division 1 teams in four of the last five League campaigns – they used just 23 players earlier this year and only 27 in the entire 2019 League campaign, compared to Dublin’s 37 – will simply get on with it.

“In an ideal world you wouldn’t have this glut of fixtures,” acknowledged long-serving forward McManus, who has also been guaranteed four group games in the redrawn Monaghan senior club championship with Clontibret. “But the bottom line is that three months, maybe even only six or eight weeks ago, it wasn’t looking like we’d have any football this year so I’m not going to sit here complaining about it.

“Yes, it’s going to be tough and challenging on the body, and you’re going to have to expect injuries, that’s going to be par for the course, but these are exceptional times and exceptional circumstances. It was always going to be a hell of an ask to squeeze club and county into the timeframe we’ve got.”

Monaghan aren’t the only ones who might feel a little hard done by with the new structure. How about Westmeath who drew the short straw of facing Dublin in a knock-out championship?

New York won’t get to play at all and it’s understood that London’s home game against Roscommon is now likely to be played in Ireland, perhaps even at Dr Hyde Park.

Or consider the scenario facing both Donegal and Tyrone who are paired off together in the Ulster quarter-finals. Those two counties will also meet in a round six League tie when activity resumes on October 17th/18th and the loser of that game could be under pressure to perform the following weekend, to stay in Division 1. Then they’ll have to face each other again in the Championship.

In Munster, Cork or Kerry will be gone after just one Championship game. Mind you, if Kerry win that Munster semi-final tie as anticipated, they’ll be roaring favourites to win the provincial final, placing them just two more steps from heaven.

Meanwhile, back in Ulster, Monaghan will have to win four gruelling provincial games on successive weekends just to get to an All-Ireland semi-final where the Leinster champions, most likely Dublin, will be waiting.

With a history of dodgy hips, McManus could be forgiven for wincing at the thought of it all. Not a bit.

“It [hips issues] is a thing that never goes away, it’s something you’re just constantly taking care of and managing,” said the Monaghan-based auctioneer. “Would it have been better for me if we’d kept going with the League back in spring? Absolutely. By the time March rolled around I was in good enough shape but it’s another of those things really, you just get on with it.”

And who’d be a manager? Séamus McEnaney’s task, for instance, is to have his Monaghan players physically fit enough for a possible four weekends of Ulster action in a row, yet also peaking for that opening weekend against Cavan when everything will be on the line.

“Look, there’s no real way of structuring that to perfection because you also have club games coming before, normally the club comes after the county, so it’s a really interesting one,” said three-time All Star McManus.

“I think all you can do is just reassess the whole thing after the club championship and see where players are at individually and take it from there.”

The flipside is that if Monaghan do win this year’s Ulster championship, adding to their 2013 and 2015 triumphs under Malachy O’Rourke, it would be particularly sweet. Maybe their sweetest ever in the circumstances.

“There’s no doubt it’s shaping up as one of the toughest Ulster championships,” acknowledged McManus.

“The way I’m looking at it, and I think you’re going to be hearing this from a lot of players this year, is that we can’t look past Cavan. I don’t think we can even dream of winning Ulster titles because whoever loses that first game is gone, the season is over.”