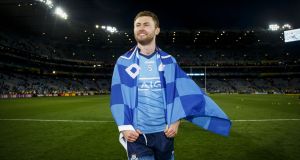 It’s difficult to think of a single player other than Jack McCaffrey whose withdrawal so significantly handicaps Dublin. Of course the one who’s not there is always most missed, but whereas there are other key personalities and the county’s biggest strength has been the outstanding consistency of the collective, the evidence is there.

Dublin can point out that they survived without McCaffrey for the whole of 2016 - when he previously took a break to travel in Africa and further his medical experience with relief agency GOAL - and virtually the entire final a year later after injury forced him off in the sixth minute.

The balancing truth though is that in the historic five-in-a-row sequence up until last September, the 2016 and ‘17 finals were those in which Dublin came closest to being derailed, both times by Mayo.

McCaffrey has been an All Star in all four of the seasons in which he played. He would need a tiered mantelpiece to accommodate all of his individual awards, from Young Footballer of the Year in his rookie season in 2013 to the senior accolade two years later and a slew of MOTM citations in vital matches, including successive All-Ireland finals in 2018 and ‘19.

In that latter match, the drawn encounter with Kerry last September, his contribution was critical. Without the personal tally of 1-3 from wing back - the goal an exhilarating display of his pace and football ability - Dublin would have been in deep trouble.

A fortnight later he sustained an injury and others stepped up, which makes the point about the team’s collective power but that’s the way great sides operate.

Some weeks after last year’s All-Ireland he spoke about his evolution as a player from spring-heeled Jack, the attacking wing back, in the early years to a more multi-dimensional footballer.

“I suppose the system of play that we use now is very different: 2013 was helter-skelter the whole time. I’m probably not quite as fit as I was then either, so I just probably can’t do it as often as I did. I probably have a bit more defensive responsibility too.”

Word of his possible departure began to percolate over the past week, as he shared plans with team-mates. It’s a headache for new Dublin manager Dessie Farrell, who was already facing a hugely challenging year, as he took over the first five-in-a-row winners in GAA history.

Appointed relatively late in December, he already had ground to make up but five matches into a fairly experimental league, the All-Ireland champions lie in fourth place. In a way Farrell has his alibis if the truncated season doesn’t work out.

The Dublin manager was unavailable for comment but is believed to accept that McCaffrey, 27 this year, won’t play any role in the 2020 championship even though collective training doesn’t officially get underway until September 14th. There are also apprehensions that he may intend to depart the county scene altogether and concentrate on his club, Clontarf.

County board sources say that they have heard nothing officially from the player.

There has been speculation about the reasons. News of his intentions was broken initially on Saturday in the Irish Mirror and shortly afterwards - and independently - by independent.ie. The former suggested that work commitments lay behind the decision whereas the latter said that the player wanted a break from the game.

It’s possible that there has been an accumulation of influences. McCaffrey is a junior doctor based in Kilkenny, a demanding role at the best of times but especially so in the current pandemic.

He is also a very public figure, one of the best known of the Dublin players. Acknowledged for his free-spiritedness, he has always asserted the importance of a rounded perspective, the acknowledgement that whereas football is a hugely enjoyable part of his life, it’s not an exclusive definition.

A conversation with the parent of an under-age player a couple of years ago made the point: McCaffrey had addressed the group and made sure to emphasise the importance of balancing football with academic commitments and attention to career.

There are also considerable demands on the time of prominent sportsmen. Social media shows how much work he does for good causes, supporting health campaigns, mental wellness initiatives and charitable sleep-outs as well as the traditional hospital visits by successful teams.

He spoke to Newstalk’s Off The Ball after last year’s All-Ireland final, about how there was a sense of the public ‘owning you’ in the run-up to big occasions.

Given his achievements, he must also absorb the pressure of expectation.

There is no player who sends such voltage through supporters when on the ball - for instance the rising excitement during the build-up to the goal in the drawn All-Ireland against Kerry.

McCaffrey’s pace carries him past Kerry players as well as his own team-mates and suddenly the crowd can see the gap as he surges into it, takes the pass from Niall Scully and buries the goal.

Then there is club. Last October he addressed the familiar fault-lines of the club-county interface.

“For the past number of years while I’ve been playing for Dublin, it’s been no use to me and of limited use to Clontarf that I play every championship game when I’m available to play practically no league games and we languish in Division Two and towards the end of it some years or have a very tough year in Division One.

“The balance is not correct is the short answer. The simple reality is that there 99 per cent of people playing club football and one per cent playing inter-county and it’s certainly not treated that way.”

It’s not clear how this will play out. There are virtually three months until the counties go to the line for this most unusual of championships but Dublin are resigned to not having Jack McCaffrey. Their loss in the meantime will be Clontarf’s gain.