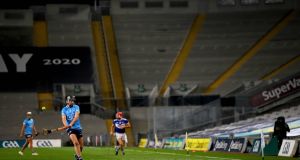 Dublin hurlers won the first engagement of what at this stage feels like the parallel universe 2020 championship with an ultimately handsome win over last year’s tormentors Laois, but the match hung more in the balance than they would have wished for most of the match.

They led from start to finish but couldn’t bury their opponents who resisted gamely until the final 10 minutes. Donal Burke, the young Na Fianna forward, who was unavailable last year, spearheaded the victory with a magnificent 1-16, mostly dead-eye free conversions until he eventually put one wide late in the second half, but also 1-3 from play.

The goal in the 24th minute after he smartly tidied up a possession before running hard and direct at the defence and deftly planting the ball past Enda Rowland to open up a seven-point lead, 1-12 to 0-8. Minutes later Riain McBride had the opportunity effectively to close the book but having swerved into a good shooting position, he saw the Laois ‘keeper make a fine save.

Stadium announcer Jerry Grogan referred to the ‘strange environment’ but Croke Park looked immaculate on Saturday evening with the autumnal sun bathing the ground and the pitch looking better than any of the small number present could remember after the longest rest the surface has ever had.

It was eight months to the day since Dublin footballers beat Donegal in the league although that of course by now that feels a world away.

Laois arrived pushing the glass ceiling that always appears to descend on counties who make a breakthrough as they did last year adding an All-Ireland quarter-final to the McDonagh Cup and promotion to Division 1. Along the way they had scalped Dublin on a white-hot July afternoon in Portlaoise.

Manager Eddie Brennan referred afterwards to the motivation his team must have given Dublin and although proud of the team’s persistence, was a little disappointed by the big margin and declared that 2019 was now in the rear-view mirror.

Dublin counterpart Mattie Kenny wasn’t dwelling on the past either nor can he, given the immediate appointment with Kilkenny in a week’s time back in Croke Park.

He will have been happy with the score - he noted the theory that empty grounds had contributed to high scoring in the English soccer Premiership - but not so much with the less than firm grip his team took on a match that they were largely dominating.

Wasteful use of possession, some poor shot selection and other inaccuracies undermined their efforts but 2-31 is a big total to put up even if it was burnished by 1-3 in injury-time, the goal from replacement Eamon Dillon, who leapt into the floodlit sky to pull down Mark Schutte’s dropping strike, take it cleanly and use his physicality to make space for a thunderous shot into the Canal End goal.

Early exchanges saw both sides operating with a sweeper. Seán Downey started in that role for Laois and Conor Burke had a fine match for Dublin, busily reading the ball and darting up field, which yielded him two points.

Dublin had more possession but wasted a good deal of it with poorly directed ball into the attack. When the forwards got possession they were often bottled up by a diligent Laois defence but as the half wore one, the Midlanders couldn’t indefinitely resist the tide.

Donal Burke as mentioned was the star turn, shooting an impressive 1-9 before half-time and registering the crucial goal.

In the great championship win the previous year, Laois took control on the scoreboard early and held off Dublin’s attempts to wrest back the initiative. This time they were always chasing and with a conservative configuration - Ross King and Stephen Maher manning the full-forward line until the latter, who scored two smart points, appeared to view the presence of two of them so far advanced as an extravagance and dropped back.

King battled very effectively but his impact was from frees, a good few earned by himself, hitting them for 0-10, which kept the scoreboard ticking but without more offensive ambition, his team would struggle to make up the seven-point half-time deficit, 1-16 to 0-12.

Kenny made the fair point about his team that various lockdowns had meant they were unable to play any challenge matches, which might explain the tendency to fire ball into unoccupied areas and otherwise look less than fluent with a possession advantage of nearly 60-40.

They managed the puck-outs well, assisted by Laois’s skeleton staff up front but having made what looked the decisive break on the scoreboard just after half-time, taking the first four points, they were out-scored by their opponents, 0-8 to 0-3 for the remainder of the first quarter.

Captain Chris Crummey’s continuing redeployment at centre forward from All Star nominated defensive roles took a while to have an impact but having been responsible for the team’s first three wides he ended up with 0-3 and a performance which used his physicality well to break up play.

Otherwise with the obvious exception of Burke, Dublin’s forwards were fitful but encouragingly for the manager, they came into it more effectively as the match wore on, for example former All Star Danny Sutcliffe who hurled more freely.

At full forward, Davy Keogh brought enthusiasm and a willingness to put himself about although he was lucky not to pay the price of a wild swing at Paddy Purcell in the second half. Purcell’s move into the sweeper role had helped to revitalise Laois, as he picked off some good possessions and ran menacingly at the Dublin defence.

The winners bounced back into it for the final quarter and re-imposed themselves with 1-8 to which Laois could offer only 0-3 in return.

The grace note was the point in the 71st minute, created by Donal Burke’s dexterous juggling the ball while hemmed in on the right sideline with a clutch of defenders trying to dispossess him. His final touch to Schutte created the space for the replacement to steer the ball over the bar for Dublin’s 30th point.

Much improvement needed for the coming tilt with Kilkenny but already one rankling issue has been put to rights.