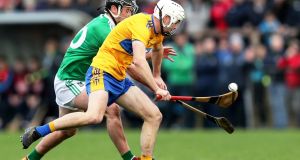 One of the big consequences of this championship’s unique timing and scheduling is going to be already on view this weekend. The drastically reduced time available for preparation is making itself felt in the number of injuries springing up in various counties.

The compressed timetable also makes potential recovery more difficult and I think injury – and for that matter, Covid testing in the run-up to games – will have a big say in how the season progresses.

This adds another layer of complexity to a championship that had become hard to predict in recent years.

Do you pick players on club form or revert to the ones who performed in the county jersey last season?

The one thing Clare have is a dangerous full-forward line

It’s important to acknowledge that this hasn’t been easy for managers or players with all of the protocols and restrictions, and I’m sure everyone wishes them well now that we’re ready to roll.

I don’t think weather will have a defining impact. The venues likely to see most action are the best available and I still think there’ll be a high standard of play. It’s going to be fast and furious from the start this weekend.

Limerick and Clare meet on Sunday in an unusual double-up of a championship match and league final. The league final is a bit of a red herring. I’m not sure anyone’s going home from Thurles saying “at least I’ve a league runners-up medal” or even “at least I have a league medal”.

Clare’s big problem is that their main ball-winners in the past two years and some of their most important players – John Conlon, Peter Duggan and Colm Galvin – aren’t available.

It’s virtually impossible to get a decent line on them but they don’t have much strength in depth. Last year Tipp beat them easily in Ennis and Limerick hammered them.

Ultimately, are they All-Ireland contenders? Unlikely, but Limerick definitely are.

The one thing Clare have, though, is a dangerous full-forward line. Aaron Cunningham, Aron Shanagher and Shane O’Donnell are very capable of scoring goals and Limerick’s Achilles’ heel in terms of depth is their full-back line.

There’s speculation that Dan Morrissey will play full-back. That’s not a position you easily adapt to – to be able to come to the ball as instinctively and confidently at the front as Mike Casey would have done. Morrissey’s instincts as a fullback have to be different to those he cultivated at wing-back.

That’s a small area of concern for Limerick, which might give Clare a bit of hope if they can get the ball in and around that zone.

One of the effects of the season we’re facing into is that there are no up-to-date form guides or indicators. Usually we would have seen anyone likely to play championship in action during the league, and the championship would kick in a few weeks later.

Ultimately they’re players who made their name in the backs, and to improve they’re going to have find natural forwards

That lack of opportunity to see players in combat apart from at club level has placed a caveat over everything.

What evidence we do have says to me that Limerick have been the best team in the country over the past two or three years. They’ve been very strong in defence and their utter dismantling of Tipperary in last year’s Munster final was probably their signature performance in John Kiely’s time as manager.

From that lofty peak they took the now-familiar slide as Munster champions, losing the semi-final where a lot of the damage was self-inflicted (and there’s no better team than Kilkenny to magnify the damage when that happens) and they never clawed back from the shaky start.

The likes of Cian Lynch, Gearóid Hegarty, Aaron Gillane and Peter Casey in the forwards means that some of the best young talent of recent years is in Limerick. They’ve won everything.

Their displays earlier this year in the league felt like declarations that they wanted to redress what had happened to them in 2019. That’s a potential danger for them. They need to be wary about keeping that desire to atone as motivation and not letting it turn into anxiety. I don’t think that will be an issue this weekend, as it’s a game they should win; but, as the pressure increases, they need to be careful.

The difficulty for Clare is the need to compete forcefully with Limerick for the ball in the middle third, and the missing forwards won’t help that mission.

It all starts in Croke Park on Saturday evening. Laois’s defeat of Dublin – themselves coming off a brilliant win over Galway – last year in Portlaoise was one of the great events of the summer.

They got going early on a fine, sunny day and Dublin were never able to get back to them. Laois went on to give a good account of themselves against Tipp but it’s so hard to build on those achievements. They did what they had to in the league but their panel strength isn’t that deep.

Dublin haven’t produced many new players and up front you can see that in the deployment of Chris Crummey and the talk of Seán Moran doing the same. Ultimately they’re players who made their name in the backs, and to improve they’re going to have find natural forwards – like Con O’Callaghan, probably the most productive forward in the county championship over the past number of years.

Dublin are favourites for sure, but I wouldn’t be surprised if Laois put it up to them.