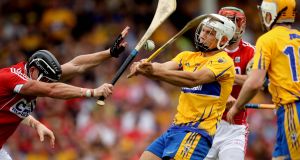 At the end, the Cork kids ran on the pitch. All the Cork kids, starting with the grey tracksuits of the victorious minor team from earlier in the day. They sprinted to celebrate with the seniors who had just breezed to a 1-25 to 1-20 win over Clare. Followed, of course, by every 10-year-old in the county. The hoors are coming in waves.

A year to the day after they exited to Wexford here in a qualifier, they became Munster champions for the 52nd time. They never once trailed in the game and from the spell in which they hoisted five points on the bounce after Tony Kelly’s missed first-half penalty, they always kept Clare where they could see them. It was a five-point hiding, truth be told.

For Clare, it was a day when they just couldn’t seem to match Kieran Kingston’s side for rhythm or fluidity. They always seemed to be searching for their game, like a lead-guitar trying to find a tune in a jam session. Problem being, this one just happened to be on-stage in front of 45,558 paying guests.

Between wides, woodwork, short balls and one fine Anthony Nash save late on, Clare squandered 17 scoring chances. And yet it was the kind of game where even if they’d taken half of them, it’s entirely feasible that Cork would just have gorged away to a fatter total themselves. The upshot is that Clare’s ache for a Munster title will hit 20 years next summer.

“If you convert your chances you’re the better team, and they converted their chances,” said Clare co-manager Donal Moloney. “We didn’t. Unfortunately we had two goal chances, we got one and hit the woodwork, but they scored some excellent points, particularly when we got close to them. Fair play to them.

“We probably elected to take shots from out the field that we’d normally expect to go over. Whether it was the wind or what I don’t know, but we didn’t convert a lot of them, and in one period midway through the second half we had three or four in a row.”

For Cork, the kids had their say again. Mark Coleman probably has no serious rival at this point for Young Hurler of the Year, a mad thing to be able to say in early July. He had another blinding afternoon at wing-back, in the second half especially. Colm Spillane was blood-drenched at the end, although it wasn’t immediately clear whether he’d caught a stray hurley on the chin or if the splatter resulted from him having to be surgically removed from Conor McGrath at the final whistle. They have youth and they’re not afraid to use it.

“We always believed it was the right thing to do,” said selector Diarmuid O’Sullivan of Cork’s reliance on the younger breed. “For the face of Cork hurling to change, Cork hurling going forward was going to have to be able to adapt to playing against different types of systems. Cork needed to develop those things and we knew we had some younger lads who would help with that because they hadn’t been there before and it would be easier to integrate them into new types of systems.”

It says something about the general air of callowness around this Cork side though that man of the match Alan Cadogan is regarded as an old soldier. The corner-forward who only turned 24 the Wednesday before the Tipperary match was electric here, sniping 1-4 and seeing his marker Oisin O’Brien off to the bench before half-time.

Beside him, Patrick Horgan put together a tally of 0-13 (0-10 from frees), taking him past Christy Ring’s all-time total at the head of Cork’s scoring charts. Backing them all up was Nash in goal, William Tell in hooped socks, splitting apples from 80 paces with his puck-outs.

“We never panicked,” said Kingston afterwards. “In both games against Tipperary and Waterford, we’ve got different types of challenges thrown at us, goals came at very challenging times and we reacted well to them. We did the same today and that’s part of a team that’s maturing. You need that type of maturity and experience, albeit they’re young but they’re gelling together.

“It’s important that we keep this in context – you see the reaction of the Cork crowd out there, they’re starved of success. We had a similar reaction in 2014, won a very good Munster championship down in Páirc Uí Chaoimh, but we got a lesson from Tipperary a few weeks later. We have to bear that in mind, as we let the players back to their clubs for the next couple of weeks, and then prepare for a semi-final. That was a very hard learned lesson in 2014.”