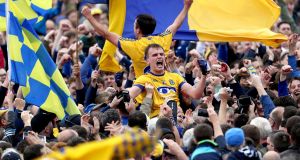 So now. Roscommon are at their best when everyone has forgotten about them. Theirs is a tradition of defiance and proving the greater world wrong.

This was one of those days: a perfect coup on a blowhard July afternoon in Salthill when they came into town and executed a perfect coup against Galway, the favourites and holders.

Everything about this match bucked all lessons and truths that league form held. This is Roscommon’s 23rd time to lift the Nestor Cup but seasoned observers were scrolling back through the 1970’s to pinpoint a finer performance. 1-6 on the board after 15 minutes: a virtuoso goal from Brian Stack during the wildest period of the second half; a lionhearted hour by Enda Smith, against Galway’s accomplished midfield, and 1-8 playing into the treacherous Salthill wind that has ruined too many summer games to count.

It was an afternoon underwritten by ferocious commitment, with yellow shirts diving to get fingertips to the ball even as Galway men stooped to collect it. Sunk in division one and reportedly struggling after a number of high profile players decided to do other things with their lives, this was a big day for Kevin McStay’s young team and they achieved it through the expressive, open football which drew admirers last spring.

Twelve months on, they got the big reward. And the old stuff, the perpetual ingredient of-ravenous hunger for the next ball, the next moment, was the key.

“The funny thing about Championship, we are at it so long when we are looking in over the fence, I did it myself for years,” said McStay later, sitting on a bench in the belly of Pearse Stadium, happy and tired.

“You draw straight lines from games of no significance. Yet inside our group there was never any sense we were coming in here as huge underdogs. There wasn’t. In a championship dressing room, it can’t be any other way. We got our different objectives right, we got a good start, I know to the outside world we weren’t even to show up, I don’t blame them for going down that way.

“The lads that are writing about it should know that in Championship if you’re energised and get totally committed, a lot of daft stuff happens in 70 minutes.”

And unlike last year’s stultifying showpiece between the counties, this version was chockablock with everything from the daft to the sublime. Galway played into the breeze in the first half and managed just a point from play in the first half and 0-3 in total. Their best move, a clean, swift counter attack involving Damien Comer and Conroy resulted in Michael Daly’s strike on goal thumping off the post. Still, apart from the supreme strength and accuracy of Damien Comer up front, Galway were bailing water all over the field here.

Their kick-out game stalled completely in the face of a full Roscommon press and a series of spectacular marks won by Smith while the hard running of David Murray, Niall McInerney and Devaney pulled the maroon defence apart.

It must have been disconcerting for Galway supporters to realise just how quickly the promise and the momentum of the league season was rendered insignificant.

Roscommon’s 15th minute goal sent minor shockwaves throughout the host county and deepened the sense of an early and unexpected crisis developing before their eyes. This was not the hapless Roscommon of League Sunday wrap-up reports. This was an organised crew that meant business.

The visitors were flawless in their kick-out execution all afternoon and the goal came through three crisp passes. After Shane Walsh fired Galway’s first - and last - point from play in the half, goalkeeper Colm Lavin played a smart ball along the left wing and it was only when Diarmuid Murtagh sent a perfectly weighted ball into Cian Connolly that most of the stadium realised he was isolated one-on-one with Declan Kyne.

Crucially, the fullback had been yellow carded after 10 minutes so he could but play the shadow game as Connolly turned to his left and slid a sweetly placed ball beyond Ruairi Lavelle.

Suddenly, Roscommon’s sky was ablaze with possibility and it was apparent to Galway football people that they were also pulsing with belief. Experienced Galway observers must have had a sinking feeling. Roscommon specialise in these moments of audacity. So it went. McStay was the subject of a lot of heated criticism this winter but he waved away any opportunity to declare this day a vindication.

“I’m really happy but I’m not going to make more of it than it is. We caught... Galway were possibly looking at other stuff. We’ll see them, they’ll come again. I have no doubt they will but I have a great sense Galway are going in the right direction. To beat Galway was a big thing for the county. We don’t beat Galway and Mayo too often. That gives us a lot of confidence.”

Galway reeled off six excellent points in a convincing spell after Brian Stack’s thunderbolt of a goal left them in a 2-8 to 0-5 hold early in the second half. There was a persuasive composure and weight to Kevin Walsh’s team in these minutes but they never fully fired.

“We were dominated completely there and wouldn’t have been expecting that. But in fairness Roscommon brought everything they had to the table and our boys didn’t.”

Roscommon did enough to staunch the bleeding when the lead was down to four and then boxed clever, playing keep ball, working a huge point through Donal Smith and, as time wound down, taking a fearsome grip on the day.

A late row resulted in three Galway men leaving the field in the 73rd minute. With the excellent Devaney leading a rampant closing surge, there was still time for Roscommon to craft three late points even as the clans gathered at the fence, prepared to storm their way into a famous day in the west.

Roscommon were into the All-Ireland quarter finals and you could hear the whooping long after they broke for the border.