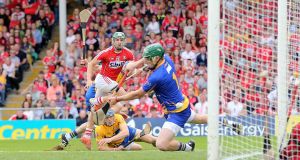 Signs were on from early on Sunday, as the Cork faithful made their way into Thurles clad in replica jerseys like red corpuscles flowing through town to reinvigorate the Munster championship.

No county gets the blood up quite like them, particularly when they have a team that has captured the imagination.

Kieran Kingston’s recast side, featuring the clutch of youngsters who have electrified the Munster championship to date, came to town, hurled up a storm and headed home as provincial champions for the second time in four years but only the third in 12.

They showcased all of the virtues that took them to this striking achievement from a starting point of 10/1 back markers when the championship began seven short weeks previously.

Clare tested them with a second-half recovery, reducing the margin to two as the match went into injury time, but without really threatening panic stations.

Cork’s new-found defensive solidity stood them in good stead for most of the match and they maintained their composure when the lead evaporated from a comfortable seven, 1-16 to 0-12, to a mere two points. Corner backs Stephen McDonnell and Colm Spillane restricted the dangerous Clare duo of Shane O’Donnell and Conor McGrath to the 1-1 the latter scored from play and a penalty earned by O’Donnell.

Clare played a part in the low profile of their strike forwards by playing little in the way of serviceable supply to them, certainly in the first half, as they sought instead to cash in on longer-range shooting, which didn’t always go to plan.

They withdrew on the puck-outs, allowing the opposing defenders to pick their clearances and with the Cork forwards in menacing form, Clare were under pressure from the word go.

Within 20 seconds Alan Cadogan was first out to a Stephen McDonnell clearance and he fired the first point. Eleven minutes later, Luke Meade in possession in his own defence played another inviting delivery in front of the corner forward. Cadogan duly pounced, rounded Oisín O’Brien and managed to sweep the ball into the net from a tight angle.

O’Brien, who was only back after a long-term injury, was replaced before the interval – the gamble on his being able to recapture form that quickly not paying out.

Cadogan had a great match, scoring 1-4, including the useful steadying point within seconds of Tony Kelly following up on McGrath’s goal with another score to make it 1-14 to 1-16.

Patrick Horgan also made it a red-letter day with a haul of 0-13, three from play, to make him Cork’s top scorer in championship history, moving nine clear of his legendary fellow Glen Rovers man, Christy Ring.

Horgan – arguably lucky to escape with a yellow card for a mistimed challenge in the 21st minute, which caught Patrick O’Connor on the head – maintained the steady scoring form and his accuracy from placed balls kept his team bobbing along.

The contributions emphasised how capable Cork have been of finding different players to come to the fore on different days. Of the younger intake, Mark Coleman was competent rather than his usual breath taking – until the hectic dying phase when a superb line-ball in the 62nd minute pushed the lead out to four, 1-20 to 1-16 and a couple of minutes later when he ran in energetic support for Chris Joyce to hit over another point.

Darragh Fitzgibbon gave another terrific display at centrefield, an area where he had Tony Kelly for company. Kelly was a more central figure for Clare this time and having taken over the free taking duties from David Reidy, starkly raised the efficiency rate and added three from play but saw his 20th-minute penalty fly over the bar – a failure to find the net that was his third of the season.

Fitzgibbon’s robust athleticism and pace however were a major asset for Cork.

With five between the teams at the break, the second-half scoring went tit-for-tat for most of the third quarter. Cork weren’t out of sight but they were comfortable until a scoring spurt carried them into that territory, 1-16 to 0-12.

Clare reacted with an unanswered 1-2. John Conlon’s driving run set up McGrath for a goal, which he scored with a flashing finish inside Nash’s right-hand post.

Cork’s refusal to get rattled when Clare raised the tempo – Cathal Malone got in to hit the crossbar after Cadogan’s answering point, as he had in the first half – restored the match to a three- and four-point margin.

The closing stages were exciting as the scores flew over but the tremors of anxiety never really rippled through the Cork ranks and they always appeared to have an answer.

In a concluding montage just after McGrath had cut the deficit to two in the 70th minute, 1-20 to 1-22, full back Damien Cahalane, whose form has been so impressive this season, came flying out of defence on a startling solo, farther and farther up the field and to cap it all had the presence of mind to lay off the ball for Horgan to bring up the safety margin of the three.

Cadogan and Horgan again, from a free, stretched the lead to its final point and sent the delirious Cork support into the immediate rapture of winning a 52nd title and the happy five-week contemplation of an All-Ireland semi-final.