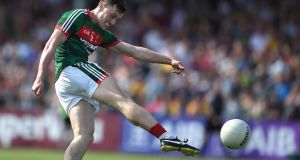 There was consolation of sorts for battling Clare whose efforts were praised by Mayo manager, Stephen Rochford, after they could only look on helplessly and watch their house go up in flames as Mayo hit two goals just minutes into the second half of a cracking qualifier at sun-baked Cusack Park, Ennis on Saturday.

Rochford gave the Munster side due credit for giving his team a serious test. “They played with a super tempo and played all the best football in the first half. We didn’t attack the ball,” he said.

Mayo trailed at one stage in the first half by 0-6 to 0-1 but closed the gap by the interval to trail by 0-8 to 0-6, Gary Brennan putting in a big performance at midfield for Clare , while Eoin Cleary, Seán Collins and Jamie Malone nailed some fine scores as Clare dictated the terms playing into the wind.

The first score in the second half from Kevin McLoughlin inside 20 seconds of the restart was to set the tone really for the rest of the game.

Said Rochford: “We set ourselves a target of getting the first score in the second half and from there we kicked on and we got a goal at a vital time in that third quarter, and I think that ignited that second half performance.”

That fired Mayo 1-7 to 0-8 ahead and before Clare could regroup, an excellent move was finished to the net by Diarmuid O’Connor. The Clare heads didn’t drop but Mayo were now playing at a different level and with renewed confidence.

The return of Keith Higgins from his red card suspension was a huge bonus for Mayo but the two most influential players in this game were Aidan O’Shea, who, for the second week running, took over at midfield in the second half, while Kevin McLoughlin’s probing passes and sheer industry was something Clare couldn’t cope with.

In a game that was robust enough at times, both teams saw two black cards apiece with referee Seán Hurson from Tyrone also dishing out plenty of yellow cards.

Mayo’s performance against Derry when they shot 18 wides had raised a lot of doubts about this team’s life expectancy and in the first half those doubts ware fully justified as they struggled to cope with a Clare side that ran at them and through them at times.

It took a fine save from David Clarke, who as making his 100th appearance for Mayo, to deny Clare a goal when he saved from Jamie Malone.

The cool head of Andy Moran, who replaced Fergal Boland on the named team, kept Mayo in touch with three points from play but this was simply a game of two halves, Clare winning the first one but Mayo’s edge in class and experience surfacing in the second.

“I think you saw more of what we’re about in the second half. I don’t think we were at our best but I think we are moving in the right direction,” he said.